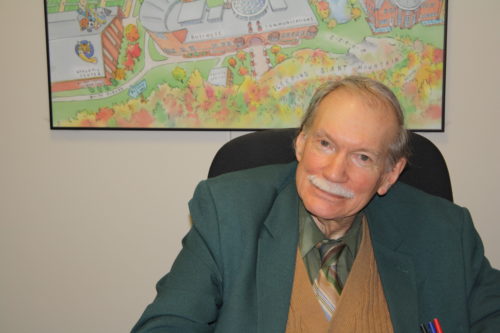 For 71-year-old David Hall, students losing their QCards is his favorite part of the day. And it should be–because for 45 years, Hall has been the go-to guy when QCards go missing.

“What makes it special to me is the people I work with,” Hall said. “It’s wonderful.”

Hall, a former adjunct English professor, is the famous face behind the desk at the QCard office in the library. Typically sharply dressed and eager to help students, he has become quite the figure around campus. 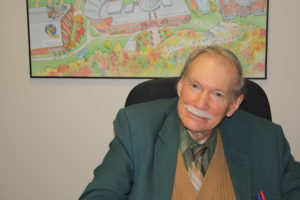 [/media-credit]“He was really nice and helpful when the QCard was lost,” freshman business management major Maya Prorokovic said. “I feel like everyone really loves him.”

And for good reason. David Hall has called the QU campus home for an impressive 50 years, beginning his journey as a Bobcat his freshman year in 1966. After deciding to become an English major, the Cheshire native opted to commute to Quinnipiac. He says the decision to go to QU was a simple one.

“It was close and I heard good things about it,” Hall remembered. “And that was all I needed to know. And I was accepted.”

Hall’s first year also happened to coincide with a historic time for the university. Fall 1966 marked the opening semester of the Mount Carmel campus; then President Sahlin just completing the move from the school’s former Whitney Ave. campus.

“It was a much smaller place,” Hall said of the campus’s initial state. “All we had here when I arrived was most of the library, about half the student center, Tator Hall and what is now Irma and Dana.”

Hall was able to complete his bachelor’s degree in English in 1970, and already knowing that he wanted to become a professor, set out to complete a master’s degree. He spent the next two years studying at Boston University. But in 1972, he knew he had to come back.

That’s when he returned to Hamden – this time as a part-time English professor, instead of a student.

Hall says that while he enjoyed the position, he needed to earn more money. That’s when he reached out to the school’s then business manager, asking for a supplementary position.

“He said, ‘how do I know you’re going to stay with me for any length of time?’” Hall remembered of his interview. “And I said, ‘well you’ll just have to take my word for it.’ So he took me on and I’ve been here ever since. I guess I didn’t go away.”

And he never did. That was in 1973, and Hall has been behind the same desk every since. Over those 46 years, the adjunct professor has witnessed the evolution of Quinnipiac from a local commuters’ college, all the way to a nationally acclaimed university.

“It changed tremendously,” Hall reminisced. “More residence halls. More students. Quinnipiac College it was until 2000. Oh, where’s that? What’s that? Now they all know. We have a reputation. We’re well known. Good reputation. Programs are excellent. And it’s fantastic.”

Beyond the institutional changes, Hall cites other differences in the Quinnipiac of today and the one where he was once a student.

Namely aesthetic, he says that the school as a whole appears to be a “little more finished.”

Some things, however, haven’t changed. Coincidentally, it’s those things that haven’t changed that make Quinnipiac such a special place for David Hall.

“The atmosphere,” Hall remarked. “The people. Everybody is so open and accepting and friendly and intelligent and do their work so well. That’s what makes it special to me.”

The people and atmosphere that continue to brighten Hall’s day are also what made him enjoy teaching to the degree that he did. An English 101 and 102 professor for a remarkable 42 years, he saw nearly every type of essay, book and discussion go through his classroom. He notes those as some of his favorite things about being an English professor, but what ultimately made him the happiest was helping his students.

“There was a particular student who had no confidence in her ability to write. But she was pretty good,” Hall said of a student he taught many years ago. “I brought her along and she really improved. When you make them more confident in their work… That’s what I love the best.”

Hall was laid off from his professing position in 2014, amid a slew of university-wide cutbacks. But it wasn’t a problem for Hall, explaining that he “didn’t mind in the least after 42 years.”

Fast forward to 2018, and David is still enjoying his full-time position, which technically is “some kind of secretary,” but mainly holds him responsible for assisting students after losing or breaking their QCard.

Hall says that on any given day, he helps a couple dozen students recover their QCards. That’s a lot over a period of several decades.

And when asked if students ever offer him amusing anecdotes about how exactly they lost their IDs, Hall explained that he has heard “all kinds of stories…Some you believe. Some you have some trouble with.”

Recalling incidents like one student getting their card stuck precariously between two buildings, and another having a dog eat it, not much would surprise Hall after all these years. Something to keep in mind next time you need to pay David a visit.

But depending on the reason for your next visit, you may or may not be coughing up $30. Hall explained that QCards  cost the university money to produce and issue – hence the charge for the lost ones. QU doesn’t hold students accountable for broken ones – which is through no fault of their own.

After a full day’s work, Hall returns to his Cheshire residence. The house he calls home happens to be the same one he grew up in; he moved back in after splitting up with his wife in 1981 and inheriting it from his parents.

There, Hall enjoys what most would assume an English teacher might— reading. Presently, he is enjoying a non-fiction piece on the Spanish civil war. A longtime fan of Charles Dickens, he is also experiencing a mystery ‘enthusiasm.’ And to those in need of a new read, he recommends the work of mystery author Ruth Ware and the 2014 novel ‘All the Light We Cannot See.’

That recommendation is a sincere one, too. As someone who taught literature for his entire professional career, Hall’s passion for all things creative and written are obvious – as is his fervor for encouraging others to read.

A sage and learned man, his insight on a wide range topics is always on full display. But it’s not just book smarts he has going for him. His 50 years worth of experience at Quinnipiac has awarded him some pretty exclusive know-how about the place so many call home.

One of the best tidbits Hall offered was the pronunciation of the Sahlin residence hall. He says that the common way of saying it, “suh-lin,” is in fact false. As it turns out, the proper way to pronounce the name is more like “suh-lean.” The residence hall was named after President Sahlin, who was in office when Hall began his undergraduate years.

Hall says that President Sahlin was proud of his Swedish heritage, and was vehement about the way his name was pronounced – a gentle reminder to those apparently disrespecting our former president’s legacy on a daily basis.

But even with 50 years under his belt, David Hall is nowhere near retirement from his current post at the QCard office.

In fact, not only does he plan on working indefinitely, he has a goal to achieve before he even considers retirement.

“The secretary of athletics was asked to resign last year at 94 years old,” Hall joked. “I’m going to stay as long as I can.”

And his fountain of youth? It’s simple.

“The students. They keep me young.”