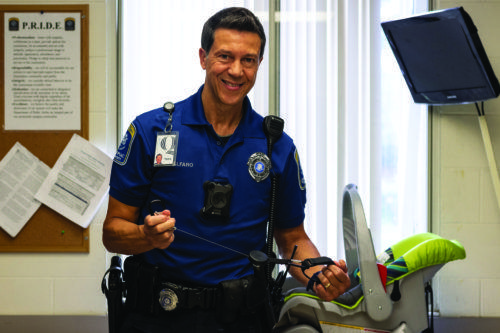 Public safety officer Roberto Alfaro has found his purpose in life: helping others. Alfaro, as both a first responder at Quinnipiac, a father and grandfather, has made it his goal to help others in everything he does.

Alfaro’s efforts in helping others also goes outside of his family and job. He recently created a device to help other people and their children be safe in their cars. Alfaro calls this device Hooked on Baby: The Life Line to your Baby. 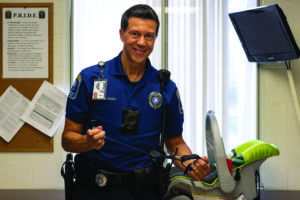 [/media-credit]The idea came about after Alfaro said he saw a story on the news earlier this year describing the multitude of child fatalities due to heat strokes after they were forgotten in hot cars.

“I saw a really sad news story on TV where they talked about how kids are dying at a high rate in hot cars this year more than any time, – the rate is higher than any other year,” Alfaro said. “It really broke my heart to see that.”

Under Connecticut law, it is a Class A misdemeanor (punishable by up to a year in prison, up to a $2,000 fine, or both) to knowingly leave a child under age 12 unsupervised in a motor vehicle for a time period that presents substantial risk to the child’s health or safety. It is a Class C felony (punishable by one to 10 years in prison, a fine of up to $10,000, or both) if the child is left between the hours of 8 p.m. and 6 a.m., according to cga.ct.gov.

When Alfaro discovered how common these events were, he thought of a plan to try and prevent any more from happening in the future, and thus, Hooked on Baby was born. Alfaro posted a complete guideline on how to use his invention on Facebook on Thursday, Aug. 23.

“The idea is to connect your baby’s car seat to you or any personal item such as a backpack, purse, etc,” Alfaro said in the Facebook post. “When you try to leave, or you grab your personal item, it tugs at you forcing you to look back at your baby before unhooking.”

All an interested parent or guardian needs is to purchase a velcro strap, a RAM-PRO heavy retractable key chain and a spring link. All of it should cost only $10 or less, according to Alfaro.

Alfaro’s Hooked on Baby post has been shared hundreds of times and seen by over 20,000 people along with messages admiring him for thinking of the idea, but Alfaro stresses that he does not intend on making any profit off of it.

“I am not making a cent out of this. I am just doing this as a concerned parent, grandfather, and a first responder,” Alfaro said. “As much as people tell me, ‘Oh, you should patent it,’ I said, ‘No listen, I have to pay it forward somehow and this is my way.’”

Alfaro not only spoke about his invention on Facebook, but also on the radio station AM 1220 WQUN with Brian Smith, host of The Brian Smith Afternoon Show on Wednesday, Sept. 12. Smith said Alfaro’s passion for protecting children really shined as he described his invention to him and the listening audience.

“I think it is a great invention. Simple, inexpensive and so practical, it makes you wonder why no one came up with it before,” Smith said in a statement. “It is important to remember, Officer Alfaro is not making money off this at all, instead, he is merely providing the “recipe” for the ingredients that can be purchased on Amazon or in a local hardware store.”

Alfaro sees his idea as a way to save lives and also in his words, pay it forward, after he  was saved during a traumatic experience he had as a baby.

“One particular day I got really sick, I contracted some e coli type bacteria, I don’t know if it was in the milk or the water. (My parents) rushed me to the hospital,” Alfaro said. “I ended up in a coma for three days, and (the doctors) gave me my last rights and my parents thought I was going to die.”

Alfaro doesn’t recall what exactly helped him overcome his illness, but he always looks back on the day he was cured as a miracle and has made it his mission to give other people that same fighting chance at life.

“I’m getting tons and tons of messages,” Alfaro said. “Everything from, ‘congratulations, wow we needed this.’ That really means a lot to me. That tells me that I’m doing something right. If I could save one life it would just make my day.”