Bobcats around the world: Polish prodigy 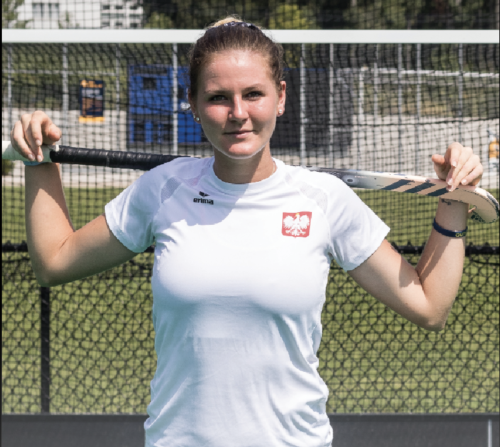 When looking out on the Quinnipiac field hockey turf, many eyes will turn to see a new face in the No. 8 jersey with a tattoo on the left shoulder, standing tall above the other players.

If you are close enough to listen, you’ll even hear the European accent.

This is no freshman. In fact, graduate student Bianca Strubbe, or “B” as head coach Becca Main calls her, has had much more experience playing than most of the other women on the team.

Strubbe comes from Wroclaw, one of the largest cities in Poland. She has played on both their junior and senior national team, in which she is still a part of the latter team today. Surprisingly, despite the popularity of the sport in Europe, Poland is not known for its field hockey.

“Nobody knows the sports, and that’s very sad,” Strubbe said. “When people saw me with my backpack and my stick, they asked me if I’m playing ice hockey, golf or if I had a guitar. There are not a lot of players, and we don’t have a lot of opportunities to play.”

So, how is that a girl could find a sport that seemingly no one is playing?

It was simply hanging out with a group of friends that got her into it. 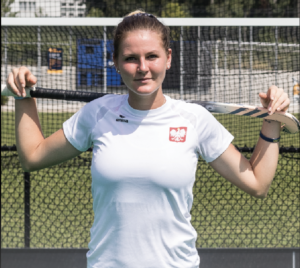 [/media-credit]“All of my friends in my city, after classes, would hang out together,” Strubbe said. “They said there was a new trainer around and were going to play field hockey and asked me if I wanted to join them.”

I’d bet she is pretty happy she was hanging out with that crowd.

Strubbe picked up field hockey at the early age of seven, which is much younger than when girls in the U.S. do. Field hockey is typically introduced at the middle school age. But while the American girls were still getting their skills down, Strubbe was making grown-up decisions.

When Strubbe was 15, she made the big choice to uproot her life in Poland and move to the United States. She has been playing for the HTC field hockey club in Connecticut, which is where Main first noticed her.

“I saw her play at her clinic and the moment I saw her play, I don’t know how to put it better than to say that I wanted her,” Main said.

It was a scenario that Main wanted to work out, but wasn’t sure if it actually could happen. Strubbe and HTC worked out all the paperwork and were able to get her the eligibility that she needed.

“For us, it was a dream kind of situation,” Main said. “Everything had to align, everything that had to happen actually happened and fell in place for us.”

Main could see on the field what she was getting out of her European recruit. However, Strubbe offered a lot more than what met the eye.

“Obviously, when you have someone with international experience and also more of a veteran on the field, you’re going to expect certain things about their skill level,” Main said. “Things we expected, like really high hockey skill, we got. But the thing I didn’t expect was the level of fitness she brings, it’s very elite, very international. And then also her leadership skills.”

Coming in as the oldest player on the team, Main is seeing that veteran role that she did not see when she first scouted Strubbe.

“She’s a really strong leader and people follow her,” Main said. “They love to follow her example on the field. They imitate how she back tackles, they imitate what she goes after.”

Even though Strubbe is the oldest, being that veteran is not something she’s used to. It is the first time that Strubbe is not one of the younger players on a team, and she wasn’t sure of what to expect from her new teammates.

Not only was the transition to a new team one that Strubbe had to endure, but also a transition in style of play. American field hockey varies from the European way.

“It’s a huge difference,” Strubbe said. “Even when you’re watching a game, a U.S. team will be very strong, fast and have power players. [European] players focus on our skills. So when you’re watching European leagues, you can see people go with the ball. They like to do tricky skills. They try to put the ball on the net in the most fancy style. In U.S. you focus on your speed.”

While she brings in that European style, Main can see how well Strubbe’s play gels with the style of the rest of her teammates.

Strubbe isn’t the only European player on the team. She is joined by freshman Elisa van Winkel, who is from the Netherlands, freshman Jess Halley and senior Anna Walmsley, who both are from Scotland, and the Ruiz Martinez sisters, Elisa and Ines, who are from Spain. The element of having international players is one that Main has a high emphasis on.

“All of the international athletes have this really different style of play,” Main said. “All the international players, it has just been their life. Bianca has probably touched a ball five, six, ten times more than the players from America.”

The selection of international players is on full display if you look at the Quinnipiac midfield position. It’s who Main calls the “United Nations” as it consists of Strubbe, van Winkel and both Elisa and Ines Ruiz Martinez.

While the season is still young, with the team sitting at 2-3, Main wants to make sure that her Polish prodigy is being used to the best of her ability. 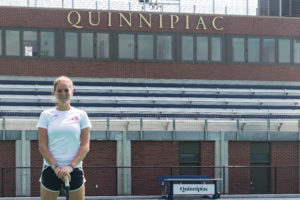 [/media-credit]“We’re trying to make sure we’re utilizing her the best way possible,” Main said. “She plays both sides of the ball. When you watch the game, she goes from one end line to the other line. She’s in the attack corner, she’s in the defense corner. You can do a lot of things with those great athletes and she’s one of those athletes.”

Strubbe has yet not notch her first point as a Bobcat, but it certainly hasn’t been from lack of trying. She is tied for the team lead in total shots with seven, along with a fellow European, van Winkel.

But while she hasn’t made a mark on the scorecard, it’s not the most important thing about Strubbe’s game play.

Strubbe’s skill set is one that certainly is being put to use and she’ll have to continue with that as the season carries on – especially if she is looking to achieve the goal of the team.

“Our goal is Big East champs,” Strubbe said. “We want to do it and we can do it. We just have to focus on our weaknesses.”

Whether that goal is achieved or not, Strubbe’s time at Quinnipiac will be finished after this year. Of course, Big East champions would be a nice way to go out. But she has her mind set on something more important.

“For me, field hockey is always going to be fun,” Strubbe said. “I want to collect my memories here and I want the girls doing the same. Even though the Big East is our goal, I also want the goal for the girls to be to collect memories.”

While she will be finished collecting the memories in the U.S., she isn’t done collecting field hockey memories yet. After her time at Quinnipiac is done, she plans to go back to Europe, where she will have the opportunity to continue to play the sport she loves for many more years.