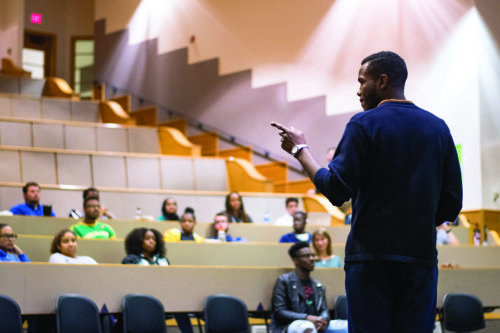 The newly-founded Multicultural Student Leadership Council kicked off a week of activities by hosting speaker and community leader Payton Head on Monday, Sept. 10.

The opening event, which took place in the Mount Carmel Auditorium, featured Head, a 2016 graduate of the University of Missouri or “Mizzou.” Head is a queer, black man who has experienced racist culture in college firsthand.

“My sophomore year when I was walking through campus some guys riding on the back of a pickup truck screamed out the n-word at me and basically told me to go home,” Head remembered. He believes experience can teach a lesson that is relevant to all colleges. 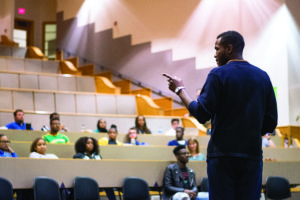 [/media-credit]“The biggest message I want to leave is that students can achieve great leadership through unity,” Head said.

His presentation,  entitled, “Lessons from Mizzou,” outlined his experiences as student body president after the Michael Brown shooting in Ferguson, Missouri, and the protests that ensued.

Head knew this was a movement that could not be ignored. The pervious student body president told him not to make a statement on Ferguson. Head did not heed this advice and rather decided to take advantage of his position as president to stage a platform that started a conversation about racism on college campuses.

And challenge they did. After a group of female students on campus who led Ferguson-related protests graduated, the university thought it was in the clear. That’s when Head, then student body president, posted a “rant” on Facebook that went viral. Head read it to the audience of Quinnipiac students, who sat in stunned silence.

“You’ve never had to experience people throwing drinks on you and yelling (gay slur) at you from the patio at Big 12 as you walk past the street holding hands with your partner,” Head read. “You might never had to think twice about what you’re wearing walking around campus at night so that someone won’t think it’s okay to take ownership of your body because your outfit was ‘asking for it.’”

Head continued with a list of experiences that he and other students on campus have undergone including discrimination against Muslim and disabled students.

“This is my reality. Is it weird to think that I have the right to feel safe here too?” Head added.

The auditorium remained silent for a moment before erupting in applause.

Melissa Solomon, a junior health science major, felt reassured that there are leaders in the world like Head who care about their constituents.

“You don’t know who’s looking out for you and who has your best interest at heart, so I think that’s really powerful when you can find allies in strangers,” Solomon said.

The student body at Mizzou united in protest against the Mizzou administration that failed to recognize and remedy the problem. One student at Mizzou even refused to eat until the chancellor of the university stepped down.

In support, the football team suspended play until the student would eat again. College students across the country stood with Mizzou, including students from Yale and Quinnipiac. Still, Tim Wolfe, chancellor of Mizzou, did not step down.

Head and his student government cabinet crafted a letter demanding the resignation of the chancellor. With a $1 million football game on the line, the chancellor eventually resigned in Nov. of 2015.

Head made it clear that his goal was not to get rid of Wolfe, but rather to get rid of racism and prejudice on his campus that he loved.

“I never wanted it to go to this point,” Head said. “I just needed them to do their jobs.”

Head ended with a call to action for the students at Quinnipiac.

“Seek the truth. The whole truth. You’ll realize that you’ll be able to change something on campus,” Head explained. “But, it doesn’t involve just you being alone. None of that would have happened with me…this was so much more.”

Coralie Joseph, a senior business management major and secretary of the Black Student Union, was impressed with the change Head was able to enact on his campus and felt hopeful about her potential to affect change too.

“I can only hope that I can leave some type of message or some type of legacy for my club and hopefully the rest of the university,” reflected Joseph.

Head left a quotation from Civil Rights Activist Ruby Bridges on the screen at the end of his speech.

It read: “Don’t follow the path. Go where there is no path and begin the trail. When you start a new trail equipped with courage, strength, and conviction, the only thing that can stop you is you.”