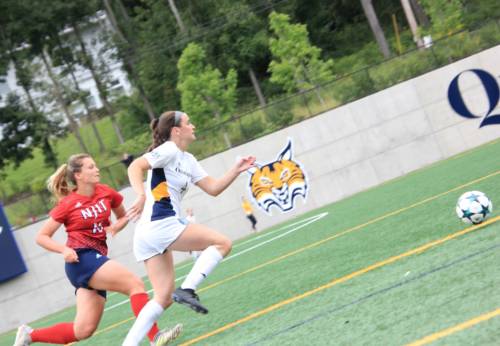 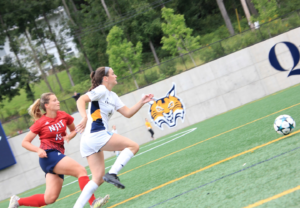 [/media-credit]On a brisk Sunday afternoon, the Quinnipiac women’s soccer team defeated the New Jersey Institute of Technology (NJIT) by a score of 3-1 to earn its first home win of the season.

Quinnipiac evened its record to 3-4 while snapping NJIT’s four-game winning streak in the process. Senior midfielder Madison Borowiec led the way for Quinnipiac with two goals, each of which were assisted by senior defenseman Jess Cascio. Freshman midfielder Selena Salas also contributed a goal for the Bobcats while freshman Fiona Wright scored the only goal of the game for the Highlanders.

Wright opened the scoring for the Highlanders with 26:11 remaining in the first half when she scored following a deflection off Quinnipiac junior goalkeeper Charlotte Edmunds. This was her fourth goal of the season. At halftime, the score remained 1-0, NJIT.

Quinnipiac head coach David Clarke discussed some of the halftime adjustments the Bobcats made.

“We talked about our own principles, and it was the first time we’ve lit them up, so the first half, the last 15 minutes of the first half was better, but we never got going, and then we adjusted, and got into their face a little bit, closed them down, and then once we kept the ball moving, that was better,” Clarke said. “They’re a good team, they’re well coached and have had a good start to the season, and we scored on them, put three past them, and that’s also a testament to what we did. So, we take pride in that.”

Edmunds did her part protecting the net, as she collected four saves and only gave up one goal despite facing 15 shots.

The Highlanders attempted more total shots than the Bobcats (15-12), but the Bobcats had seven shots on goal compared to the Highlanders’ five. Borowiec led the Bobcats with three shots, while Salas, freshman forward Emily Loney and sophomore midfielder Lauren Triglione each contributed two shots.

After the game, Clarke discussed the importance of building a win streak heading into MAAC play, which starts next week. This was the last of the Bobcats’ seven non-conference games.

“It’s important, and like I said at the time when we talked about the question of the goals, we got four of them Thursday and three of them today, and different players in different situations, popping up in different types of goals, so hopefully that’s what we can build on and use,” Clarke said. “There’s still little things, we don’t want to give away silly goals, but you’re never going to play the perfect game that you’re striving for. What we talk about more is execution, so we’ll look at a few things, but overall it was a good performance.”

The Bobcats will look to improve their record to .500 next Saturday, Sept. 15, at noon when they go on the road to face Siena.