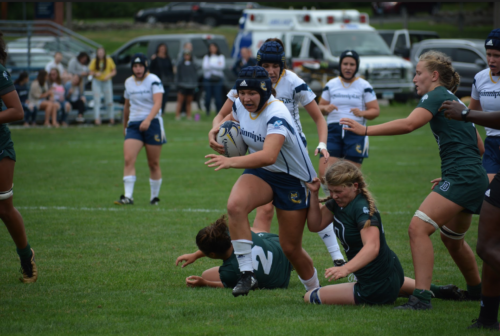 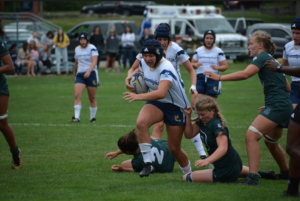 [/media-credit]The Quinnipiac rugby team lost 40-22 to Dartmouth in a rematch of the 2017 NIRA championship Saturday afternoon in Hamden. While Quinnipiac was able to come out on top in that battle last year, it fell to 0-2 on the season with a defeat at the hands of the Big Green (2-0).

Despite the loss, there were a lot of positives spoken on the Quinnipiac sidelines after the game, which was a similar response to their season opening loss against Harvard.

“I think we need to just get better each week,” Quinnipiac junior Mikah Maples said. “Just from last week, we’ve improved tremendously. I’d rather see a win at the end of the season than a win right now. I’m happy where we’re at.”

Dartmouth came out flying in the first half, scoring three ties within the first 25 minutes of the game. It was freshman Sophie Ragg, senior Camille Johnson and freshman Emily Henrich that all tallied the tries.

Quinnipiac’s senior captain Emily Roskopf got the Bobcats on the board when she scored her first try of the season. But Dartmouth added another try and went into the half with a 28-10 lead.

“We were kind of on our heels, waiting for [Dartmouth],” Quinnipiac head coach Becky Carlson said. “We gave them a little bit more real estate than we would’ve liked. That’s just something you have to make adjustments on.” 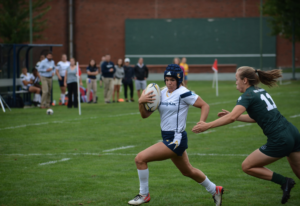 [/media-credit]After the halftime break, Quinnipiac came out much more aggressive. Quinnipiac freshman Mckenna Haz tallied a try in the first few minutes, and then it was fellow freshman Clara Lemal-Brown who brought the Bobcats to within six points when she tore down the sidelines for her second try on the season.

“Clara makes something out of nothing,” Carlson said. “The ball really just bounces into her hands and she uses her agility and has gained us those points. We’re really trying to work that ball out to her. …Using that weapon the rest of the season is going to be something that people will be pretty surprised at.”

However, mere minutes later, it was Dartmouth again with an answer as Ragg got her second try of the game. The defense of Dartmouth remained dominant and did not allow the Bobcats to tally any more points. A late try for the Big Green was the dagger, and they went on to win 40-22.

With the Bobcats falling to 0-2 – which is unfamiliar territory for the team – Carlson echoed what Maples had said, in that improving is more important than wins right now.

“I think that 0-2, it’s sports, it’s just part of it,” Carlson said. “I don’t think that expecting there to be an undefeated season out of the gate every single year is an expectation that’s going to be met all the time. …Our goal is to be better than we were last game and that’s what we saw.”

Quinnipiac’s next game will be Saturday, Sept. 8, when it travels to Vermont to take on Norwich University.