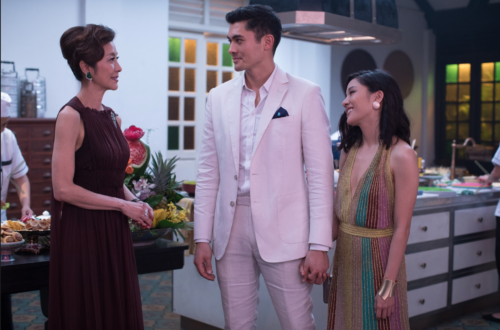 Based on the novel by Kevin Kwan, “Crazy Rich Asians” follows an economics professor at NYU, Rachel Chu (Constance Wu), who is dating Nick Young (Henry Golding). Unbeknownst to her, Nick is a part of Singapore’s wealthiest family. Rachel learns soon enough that her boyfriend is pretty much famous when she is invited to Young’s best friend’s wedding in Singapore.

However, her trip to her boyfriend’s home country becomes more complicated than she imagined – Nick’s mother Eleanor (Michelle Yeoh) disapproves of her son’s “Chinese-American” girlfriend, and gossiping friends of the family are out to get her. Her relationship is put to the test when Nick’s family’s wealth and fame make things difficult. 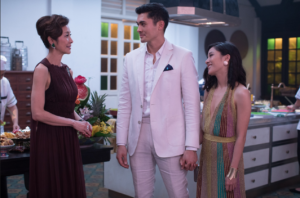 [/media-credit]Nick’s fame kind of came out of nowhere. His down to earth personality would not suggest his level of fame. Rachel jokes with him in the beginning of the film for playing basketball at the YMCA and using her Netflix account. Viewers can tell how good of a guy he is off the bat and doesn’t let his family’s wealth get to his head.

Rachel and Nick’s chemistry was obvious from the start. Nick was so excited to bring Rachel to Singapore – even though the entire country found out as soon as he asked, and his mother knew before he could even let her know. Despite her disapproval, Nick still brought his girlfriend across the world to meet his family and friends.

How much Nick cares for Rachel shines through from start to finish. Knowing how tough his family will be on her, he stills wants her at his best friend’s wedding by his side, and more importantly, he sticks up for her.

When first arriving in Singapore, Rachel was unaware of just how famous her boyfriend and his family were. Her roommate from college, Peik Lin, played by rapper Awkwafina, now lives in Singapore with her family and they informed Rachel of just how much money the Young’s really have. Peik Lin was a favorite character – she provided the majority of the humor in the movie.

Glamorous parties, posh clothing and mansions weren’t exactly what Rachel was expecting. The way this fashionable lifestyle was portrayed in the film was very well done and not over the top. It was believable, however the juxtaposition of Rachel’s character is less materialistic was a strong contrast that hopefully leave viewers not expecting all of Asian culture falls into that rich stereotype.

Director Jon M. Chu told Deadline Hollywood it would be impossible for one movie to represent all Asian people.

“One movie that represents [all] Asians — that’s just ridiculous,” Chu told Deadline. “However, if this can crack the door a little bit so that other stories can be told, and it spawns a resurgence in these stories getting shown at the highest levels possible — I would love to have this.”

The discrepancy is clear when Rachel is given a really hard time and is harassed by other women targeting her, jealous of her relationship with Nick. They put a dead fish on her hotel bed, calling her a gold digger written in blood on the wall behind. Rachel forms a close relationship with Nick’s cousin Astrid, who likes her all along. Astrid is by Rachel’s side when she faces ridicule from the other women.

It was hard not to feel bad for Astrid when it is revealed that her husband is cheating on her. She is one of the only characters on Rachel’s side and has such a kind soul. Her storyline was a nice addition to the main character’s narrative.

Nick’s mother is condescending toward Rachel throughout almost all of the movie; she even tells her she will never be good enough for her son. Eleanor believes putting Rachel’s ways of prioritizing her passions over starting a family will not work. Rachel spends most of her time trying to prove to everyone that she is good enough for Nick.

At the end, Rachel at first decides she will not get in the way of Nick and his relationship with his family, and with the help of her mother who flew in, decides to stick it to Nick’s mother just before she sets off back to New York. But in the end, Nick stands on his own two feet and makes a decision.

What is most important to note is that this movie featured an majority-Asian cast. That is something viewers are not used to and It is a true testament to the lack of diversity in Hollywood. The success of this movie can be attributed to its cultural importance, which is bringing in more than just an Asian audience but audiences of all kinds. The “Crazy Rich Asians” release was huge step in the right direction towards inclusion and diversity in film- something we haven’t been exposed to much before.

For Michelle Yeoh, who plays Nick’s mother, this film was about meaningful representation of diversity, not making the film appear diverse with a majority- Asian cast.

“Don’t speak about diversity and just have us there because you want to make it look like it’s diverse,” Yeoh told Bazaar. “Meaningful representation, that’s what it’s all about, where the characters have real hopes and dreams and lives and it’s very sincere to the culture.”

Getting the whole picture is important to Yeoh.

“It is changing,” Yeoh told Bazaar. “It was a trickle before, and this [film] will turn it into a stream, because I think we need it.”

Chu told Deadline that he hopes one day, movies like this one will be the norm, and there won’t be a lack of diversity and less of a fight for cultural visibility in Hollywood.

“That would be the dream — that we don’t have to talk about a movie just because it’s an all-Asian cast,” Chu told Deadline.

There is also exposure to both European and Singaporean culture in this movie, even though it focused mainly on upper class life. Most of the characters were overly glamorous, living seriously high class lifestyles, but the groundedness and genuineness of Nick and Rachel kept that tied down. It was easy to love them and hate many other characters. You can tell money doesn’t buy their love.

On top of the freshness of the cast, it’s refreshing that this romantic comedy isn’t cliche. The plot is different than anything seen before, and the setting and culture is completely new, and the diversity of the cast shoots the success of this movie high.