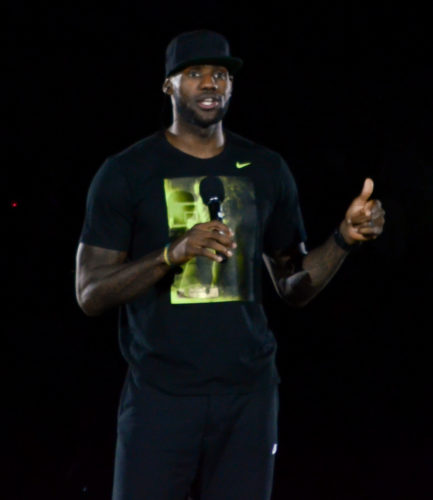 LeBron James, the man widely considered as the best player in the National Basketball Association (NBA), debuted his HBO show, “The Shop” this past week.

“The Shop” is a part of James and his longtime business partner Maverick Carter’s digital media company, Uninterrupted.

The show features many athletes and entertainment personalities and is intended to give, “viewers a one-of-a-kind barbershop experience, which for many provides a sanctuary for free-flowing and spirited discussions,” according to HBO.

[/media-credit]Instead of being applauded for opening up real conversation between people with tremendous influence, LeBron’s show was met with some backlash, specifically from Fox Sports “Speak for Yourself” host Jason Whitlock.

Whitlock said that James made a “complete and utter fool of himself” calling the show “athlete privilege” and stating that “The Shop” is a “profane, primitive and privileged look” for LeBron.

“LeBron’s shop is what Donald Trump must imagine a black barbershop is like,” Whitlock said. “Everyone is cursing and dropping the n-word and the token white liberal (Stewart) soaking it all in, feeling like the coolest person in the room because black people are comfortable being ignorant in front of him.”

Whitlock goes on to describe his experiences growing up in African American neighborhoods and the differences between the barbershops that he went to compared to the fictional one James has created with his show, calling “The Shop” fake news.

Whitlock scoffs at the fact that “The Shop” features everyone drinking red wine and specifically attacks the fact that Stewart was “dominating and driving” much of the conversation, calling him “the star of the show,” not LeBron.

LeBron’s “barbershop” may not be perfectly realistic, but it does offer a space to see people with tremendous influence in our society talking about worldly and societal issues.

But Whitlock was adamant that the “The Shop” is a negative look for James.

“I had very high aspirations for LeBron James,” Whitlock said. “He has been completely turned out by fame and pop culture. He’s 34 years old and allegedly wants to be a social activist, an educator and a role model. This is how you portray yourself?”

Whitlock said James “instantly became black Trump” and that he is lost and hypocritical.

What I believe Whitlock failed to understand is that while “The Shop” may not be 100 percent realistic, it is allowing for the conversation to be heard on issues such as the racial vandalism of James’ Brentwood home in 2017.

This was LeBron’s direct response to Laura Ingraham telling him to “shut up and dribble.”

Sure, with a bunch of celebrities in the room you aren’t going to have the same look as the neighborhoods that Whitlock grew up in, but you are giving athletes a voice.

A voice that quite frankly, the current administration of the United States doesn’t want them to have.

To call LeBron “black Trump” because he is using his status to speak out on things he believes in is a total reach.

While Trump is attacking professional athletes for saying they don’t want to go to the White House after winning a championship or because NFL players are kneeling during the national anthem, LeBron James built the “I PROMISE School” to help underprivileged kids in Akron.

I cannot speak from personal experience about being in an all African American barbershop like Whitlock.

But I can speak to the fact that LeBron James is an incredible role model.

His foundation, The LeBron James Family Foundation, pledged to send 1,100 students to college on full rides in 2016, which could cost about $41 million, according to Business Insider.

Whether you like it or not, “The Shop” gives athletes a voice. The show allows for storytelling and candid conversation between people at the peak of their profession, yet still face racial scrutiny.

Whitlock offers valid points, but I believe he goes overboard by saying James isn’t doing his job as a role model because the show features a lot of cursing and isn’t completely accurate to his experience.

We want our athletes to be candid and those featured in the first episode were candid talking about their experiences in life.

Honestly, who really cares if a few curse words are dropped in between?

LeBron created something to give athletes a seat at the table when it comes to social issues, something that I am all for.

And while we may debate if he is the greatest basketball player of all-time, we cannot debate LeBron’s influence.

As long as he keeps using that influence to help kids and bring attention to the social issues plaguing our country, then I’m here for it.