Combined commencements cause some controversy 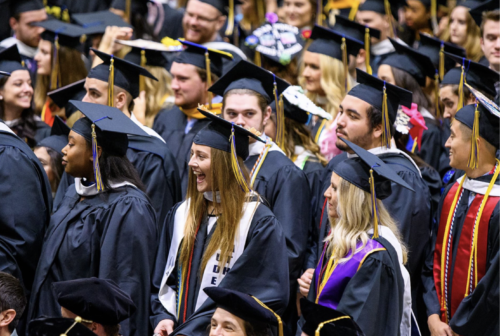 The class of 2019 will be walking across the stage at graduation with more than just the people they have sat next to in their major-specific classes.

The Commencement Committee announced the schedule for the 2019 Undergraduate Commencement ceremonies on Friday, Aug. 31 in an email from Quinnipiac University Events. The announcement brought about changes that students have mixed feelings about. 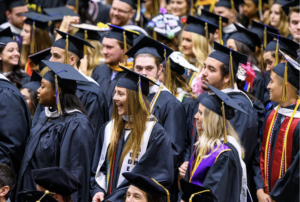 The decision was ultimately made by President Judy Olian, Executive Vice President and Provost Mark Thompson, and Vice President for Public Affairs Lynn Bushnell. Bushnell said the deans of each school were consulted and fully supportive of the change as well.

This is not the first time commencement ceremonies have been combined at Quinnipiac. In 2015, ceremonies were also combined (business and communications, health sciences and nursing, and arts and sciences). In 2016, the ceremonies were separated into six individual ceremonies, including engineering, Bushnell said.

“All three of us agreed that it would be a more celebratory event if we could combine them,” Bushnell said.

According to the email, the Commencement Committee heard from past graduates they had desires to be able to experience graduation with more of their classmates, while still keeping the individuality of school specific ceremonies. This change will also get rid of evening ceremonies to cater to the families who want to celebrate post-commencement earlier in the day, which was another desire expressed by past graduates and their families.

“Looking at it again with fresh eyes, it just didn’t make sense to keep all of them separate,” Bushnell said.

Some seniors are not taking it well.

In a survey conducted by The Quinnipiac Chronicle, out of the 95 students who responded, 67 were opposed to the change, 16 were supportive, and 12 voted other, some specifying they were “indifferent” about it or “couldn’t care less.”

Senior nursing student Nicole Bucci is not happy with the change.

“I feel as though that every school works really hard in their own ways. They are all specifically deserving of their own commencement,” Bucci said. “It’s just about having everyone given the chance to walk across the stage with pride for their school.”

The three administrators took the size of classes into consideration when choosing which schools to combine for commencements, but Bushnell said it can also be contributed to connections between the pairings. For example, engineering used to be a program within the School of Business before it became its own separate school.

Because of the combinations, there is also a cut in the number of tickets each graduate is allotted for guests to attend the ceremony, which is something some students are also upset about.

Though each student is given four or five tickets for the ceremony, there is no limit to the number of people graduates can invite to watch the ceremony on the large screens in the hockey arena next to Lender Court.

Bushnell considers this as an advantage for students.

“I think that everyone, regardless of whether they’re in [Lender Court] or in the hockey arena next door…watches it on the big screens, it’s just a compelling way to see it,” Bushnell said. “I personally don’t see that as a major deterrent.”

Annie Dumas, senior physical therapy major, is upset about having to choose who she will invite to her graduation now.

“I have six immediate family members, so what? Are my siblings not going to come or my parents?” Dumas said. “How am I supposed to choose?”

Bucci believes graduates shouldn’t have to ask their classmates for extra tickets.

“It’s about watching the people that I’ve stayed up all night in the library with, driven to clinical with, to see them  walk across the stage with eight of their family members there, not four,” Bucci said. “I have worked so hard and there’s certain people in my life that I really want to be there and I feel like I shouldn’t have to beg people to pick and chose for another ticket.”

Bucci is also wondering if it has something to do with the university wanting to combine speakers.

Each commencement ceremony will feature one speaker, as well as speeches from each school’s respective dean, Bushnell said.

“[Deans] will have to coordinate those efforts to try and come up with a speaker who’s experience and speech would address all the graduates,” Bushnell said.

Senior Class President Matt Corso personally agrees that specific schools should have their own ceremonies. He has read his classmates reactions to the change on social media, and plans to get more feedback from the class of 2019. Corso talked about surveying seniors on the Quad himself, conducting focus groups and collecting his own data to bring to the administration’s attention.

“If there’s an overwhelming response to kids not liking this, then I think it’s my duty and the senior class cabinets duty to do their job and look into this and try to change it and advocate for what our class wants,” Corso said.

“The whole thing about our class, the class of 2019, is that we just want to be at the table when these decisions are being made,” Corso said. “Am I asking to be in every single meeting that has to do with the senior class? No, but I think that [with] decisions like these, the senior class cabinet could sit in on and provide feedback.”

Bushnell still expects the ceremonies to last under two hours despite the combinations. Graduates will still be seated in alphabetical order by program. Students in the two schools will be not merged, but will be in the same ceremony.

“We have had some concern about the tickets which is to be expected, but I do think having the overflow arena with the large screens in it is going to address some of those issues,” Bushnell said. “We’ve tried really hard to personalize them over the years and I think you will still have that feel.”