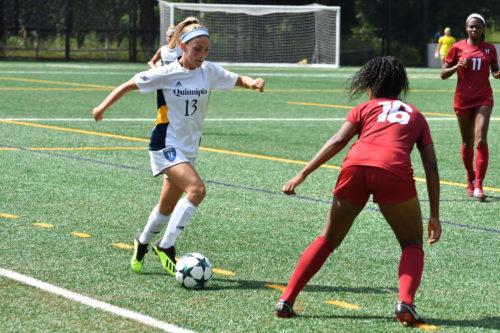 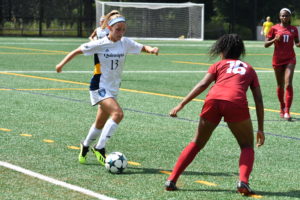 Despite getting off just five shots to Harvard’s 19 — and two on goal to Harvard’s nine — the Bobcats had multiple scoring chances throughout the game. It was a lack of execution that derailed Quinnipiac.

In the first half, Quinnipiac had a prime scoring opportunity with 31 minutes remaining. Senior forward Al Pelletier dribbled down the left side of the field and appeared to have senior midfield Madison Borowiec free in the middle on a short cross, but the pass sailed just wide and Borowiec was unable to corral it.

“I think we deserved to lead at that time,” Quinnipiac head coach Dave Clarke said.

The game was scoreless at the half, with Harvard totaling seven shots and Quinnipiac getting off just one. Again, some of Quinnipiac’s best chances — much like the missed connection between Pelletier and Borowiec — didn’t even end with a shot attempt.

Early in the second half (37:32 remaining), Harvard finally broke the tie. Harvard sophomore forward Murphy Agnew laid the ball off to the right side of the field where freshman Sophie Hirst finished the job. Hirst struck the ball into the top left corner of the net, past the outstretched arms of Quinnipiac junior goalkeeper Olivia Myszewski.

“We got caught in the counter,” Clarke said. “We tried to force a pass and it got picked off and then it’s like everyone’s dominos toppling. So, we talk about where we want to concede possession and we conceded in a dangerous area and we got punished.” 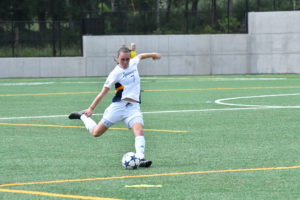 [/media-credit]The Bobcats had a few more chances the rest of the way — including a strong header from redshirt freshman forward Kelsey Goldring after a pass from senior Jess Gargan — but they were unable to convert. Clarke noted how it’s a much different game when playing down 1-0 versus being ahead 1-0.

Now, the Bobcats have gone three consecutive games without putting the ball in the net. This comes after scoring five times in their first two games (4-2 loss to Boston College and 3-0 win over Bryant).

“No [it’s not concerning], you also have to look at the preseason top-10,” Clarke said. “We’ve played five of the top six in the region, and [we did it] purposely. We knew there was a threat that we could be 1-4. We were hoping to test ourselves.”

Test themselves they have. The Bobcats have two more non-conference games remaining against UMass Lowell and New Jersey Institute of Technology before MAAC play opens on Sept. 15 at Siena.

“The key is how we respond against UMass Lowell and then NJIT,” Clarke said. “We have a week after [the NJIT game] to prepare [for MAAC play]. There’s a lot of positives from this game. I think we deserved to score and we were unlucky on a few occasions.”

Quinnipiac will travel up to UMass Lowell on Thursday at 7 p.m. for their final non-conference road game of the season before returning home to play NJIT next Sunday at noon.

“Our test now is Thursday,” Clarke said. “[Today] was playing a team to see how good we really are, and now we’ve got to go play well on Thursday. We can’t drop off.”