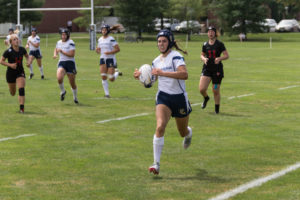 The Bobcats (0-1), fresh off their third consecutive NIRA National Championship, started the 2015 and 2017 seasons 1-1 before winning the national title, so this isn’t necessarily uncharted territory. For this team, though, the focus is less on winning a fourth straight championship and more on improving each day.

“We’re not thinking about the four-peat,” Quinnipiac coach Becky Carlson said. “There has been no mention of it whatsoever — on our bench or in our locker room. We’re just going out there and playing one game at a time, just like we have every single year.”

On the field, the Bobcats have a lot to improve before they start thinking about repeating. Within the first five minutes of the game, Harvard took a 5-0 lead on a try by freshman Sofie Fell. Quinnipiac answered a few minutes later on a long run by junior captain Mikah Maples and a successful conversion by freshman flyhalf Mckenna Haz to take a 7-5 lead.

The teams traded scores over the next 20 minutes, with Harvard taking a 10-7 lead, Quinnipiac grabbing a 12-10 lead and then Harvard pulling ahead 15-12 and extending its lead to 20-12 at halftime.

Quinnipiac’s second try, which gave the Bobcats a 12-10 lead, was scored by freshman wing Clara Lemal-Brown.

“Clara continues to approach the game with every bit of positive energy,” Carlson said. “You can see how she attacks the game — it’s not just her speed, it’s her energy, it’s the way she links up with [senior outside center] Emily [Roskopf], it’s the way she wants to attack that ball. She’s just 100 percent all the time, and I think we’re going to see a lot more of that come out.”

Harvard struck first in the second half, extending its lead to 15 (27-12) with just over 30 minutes remaining after a try by sophomore Arianna Romero.

The Bobcats inched closer with around 20 minutes to play. With a play in shambles, Roskopf got the ball and barreled her way down the pitch. Right as she was being tackled, she passed the ball to freshman wing Margot Vella, who scored the try and cut the deficit to 27-19.

“I was just trying to change the momentum and seeing what I could make of a chaotic play,” Roskopf said. “I noticed both teams were disjointed so I just took it up to see what would happen.”

Harvard scored again with less than two minutes left to put the game out of reach and secure the 32-19 victory.

Still, it was a positive sign for the Bobcats — who lost standouts Ilona Maher, Flora Poole, Rebecca Haight, Taylor Schussler and Maggie Wesolowski to graduation — to see three freshmen in Haz, Lemal-Brown and Vella put points on the board in their debuts.

“I told the team that this is probably the happiest I’ve been with a team that has lost,” Carlson said. “In past seasons we have had shaky opening games where we haven’t felt as proud of our play…I was really proud of how we came together with one-third of our team being completely new.

“Everybody was a little bit put off [because] an ‘L’ for Quinnipiac is not something you see very often. So, you have to be mindful as a coach with how you address that because they’re human beings. This stuff happens, and it’s not something they’re accustomed to, so I need to be supportive in that aspect.”

Quinnipiac’s road doesn’t get any easier, as it welcomes Dartmouth to Hamden next Saturday at 1 p.m. for a 2017 title game rematch.

“We need to regroup, watch film and just see where we might have struggled a bit, and then highlight the good parts,” Roskopf said.