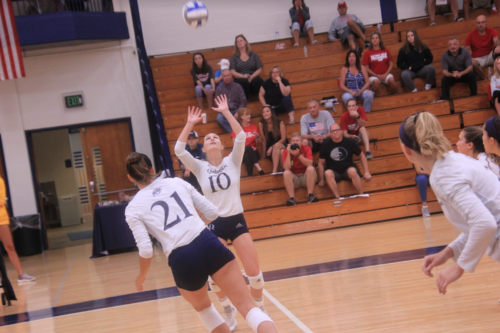 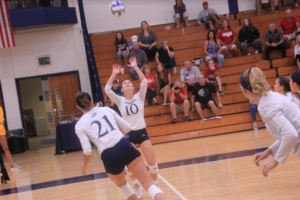 [/media-credit]Times are tough for the Quinnipiac volleyball team, as it went into today’s matchup against Sacred Heart winless and left still in search for that first victory after falling 3-1.

Redshirt junior outside hitter Liisel Nelis led the way for the Pioneers, registering 14 kills and five digs in the second game for each team in the Battle of Connecticut tournament.

“Our game plan going into set one, two and obviously set four didn’t get to the team the way that it should have,” Quinnipiac head coach Kris Czaplinski said. “We got to get back into practice and really work on to make sure that every single game we’re doing the little things.”

In set one, the teams exchanged points for a while until Sacred Heart pulled away at the end and won the set 25-20. Junior middle back Julia Murawinski tallied five kills in the first set for the Pioneers.

Set two was even more of a back-and-forth battle, as each teams exchanged leads. After being tied at 23, a service error by Quinnipiac senior right-side hitter Kat Miller and a service ace by Sacred Heart freshman setter Sarah Ciszek gave the Pioneers the two points they needed win the set and to go up 2-0.

The Bobcats turned it around in set three. Pushing the pace with their backs against the wall, with the score being 16-14 Bobcats, the team never looked back and hit their way to a 25-19 set win.

“The little things that we focus on in practice, being aggressive and serving in zones, that is what happened in set three, as opposed to the other sets,” Czaplinski said.

The momentum from set three seemed to carry over into set four.  Quinnipiac went up early 6-4, putting balls down and displaying high energy. But five straight points, including three straight kills by Nelis, put Sacred Heart ahead 9-6. The Bobcats never caught up, dropping the set, 25-19, and ultimately, losing the game.

“Sacred Heart did a great job of putting up some blocks, and we tried switching it up many times during [the set] but every little detail fell apart,” Czaplinski said. “Our passing fell apart in that sequence, the setting fell apart, the hitters’ confidence wasn’t necessarily there every single time. You give a team five, six straight points and that is going to be the difference in the game.”

Despite the loss, Czaplinski knows there is much to learn from the game.

“It’s all about getting the team better in certain areas,” Czaplinski said. “Of course you want to win, but as a coach you want to look for the positives and try to build on that in next game.”

The next game for the Bobcats will be later tonight — Saturday, Sept. 1 — in their final game of the Battle of Connecticut, as they will square off against Yale in New Haven at 7 p.m.