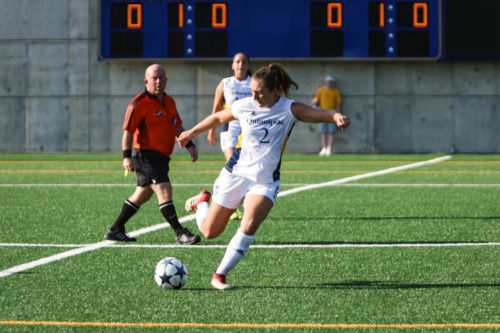 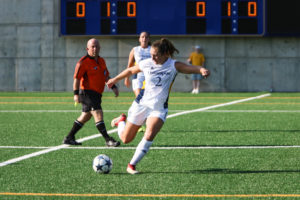 [/media-credit]The Quinnipiac women’s soccer team lost its home opener against Seton Hall on Wednesday evening by a score of 1-0.

The lone goal of the game was scored by Seton Hall sophomore midfielder Cassy Harrigan, who scored on a header with 17 minutes remaining off of a corner kick by senior midfielder Lauren Garcia, who was credited with the assist.

“We played well for the first 20 minutes, up until the first water break, and then did the same thing in the second half, and then after both water breaks we took our foot off the gas and didn’t play well,” Quinnipiac head coach Dave Clarke said.

Quinnipiac struggled to get things going offensively for the majority of the game, as it finished with only seven total shots and four shots on goal, while Seton Hall had 19 and six, respectively.

This was a very physical game, as Quinnipiac finished the night with 14 total fouls, while Seton Hall had 11. Junior goalie Olivia Myszewski held Seton Hall’s offense in check for most of the game with four saves while facing 13 shots. Seton Hall senior goalie Anna MacLean also had four saves against seven shots.

“It’s almost like one step forward, two back,” Clarke said. “There were some good things that first 20 minutes, but then the concern is why didn’t we maintain it? Why did we let them come in and take over the game? We dominated the first 20 minutes of both halves, but we gave up a lot of territory in the second 20 minutes. Is it fitness, is it fatigue? I know we were missing players today, but that’s not an excuse. Plus, we’ve been missing players all season.”

The Bobcats will look to bounce back from this loss at home on Sunday, Sept. 2, when they face off against Harvard at 1 p.m.

Despite the offensive shortcomings, Clarke doesn’t plan on changing anything before Sunday.

“There’s nothing you can do,” Clarke said. “You just go back to your style of play and principles and then players, so when they get into certain situations, they know where they need to make the runs.