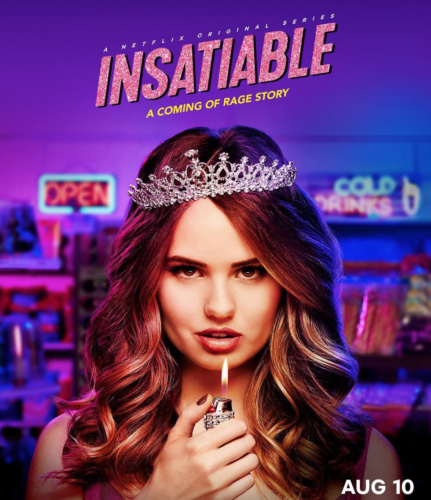 Early last month, the trailer for the new Netflix series Insatiable was released on YouTube. Since the release of the trailer, the internet shunned the new series on the grounds of toxic subjects for young adults, with body-shaming and fat-shaming being at the top of the list.

The one-minute and 51-second trailer begins with star Debby Ryan, wearing a fat suit and prosthetics that enlarge her face, begrudgingly staring at her reflection in the mirror before she heads off to high school where her locker was vandalized with the nickname “Fatty Patty” sprayed in bold.

The character Patty states, “Every day, I wonder how much more of this can I take?” before she becomes involved in a robbery at a convenience store.

The turning point of the show begins after Patty recovers from her injuries post-robbery— Her broken jaw was wired shut so it could heal, which reduced her intake of food- making her shed a drastic amount of weight. 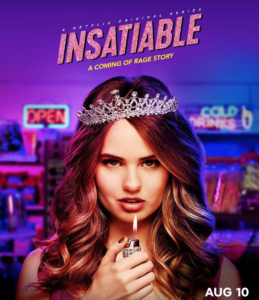 [/media-credit]After her accident, Patty returns to school with a goal of getting revenge on all of the people who teased her for the way she looked. This revenge-driven outburst entails more than just ordinary payback. In the trailer, Patty is seen slapping and punching some mean girls and even setting fire to a man in a hotel bedroom.

The trailer currently has over 4 million views and stars Alyssa Milano and Dallas Roberts alongside Ryan.

Just days after the trailer hit the web, change.org user Florence Given created a petition titled “CANCEL Netflix’s Body-Shaming Series ‘Insatiable,’” that has been signed by 233,499 supporters.

Given began her plea to the internet streaming service by explaining why this storyline was harmful for young adults.

“For so long, the narrative has told women and young impressionable girls that in order to be popular, have friends, to be desirable for the male gaze, and to some extent be a worthy human…that we must be thin,” Given wrote. “That is exactly what this series does. It perpetuates not only the toxicity of diet culture, but the objectification of women’s bodies.”

Due to the overwhelming request to have the show not be released, creators and stars of the show came to social media to defend the project.

Ryan posted a lengthy note to Twitter, detailing her support of the show.

“As someone who cares deeply about the way our bodies, especially women’s [sic], are shamed and policed in society, I was so excited to work on Insatiable [sic] because it’s a show that addresses and confronts those ideas through satire,” Ryan wrote. “Twelve years into my own struggles with body image, struggles that took me in and out of terrible places I never want to go to again, things I choose every day to leave behind, I was drawn to this show’s willingness to go to real places about how difficult and scary it can be to move through the world in a body… being praised or criticized for its size.”

Ryan concluded her note with a plea that viewers would give the show a chance after it’s release to discover the true meaning behind it.

“I hope fans will wait and watch the show before passing judgement,” Ryan said.

The show’s creator and director, Lauren Gussis, also used Twitter to defend the show that was born out of her own life story.

“When I was 13 I was suicidal,” Gussis wrote. “My best friends dumped me, I was bullied, and I wanted revenge. I thought that if I was pretty on the outside, I’d feel like I was enough.”

“This show is a cautionary tale about how damaging it can be to believe the outsides are more important– to judge without going deeper,” Gussis wrote. “Please give the show a chance.”

Despite the pleas for the show to be cancelled before its release, Netflix Original Series Vice President, Cindy Holland, gave a statement that defended the show.

“Ultimately, the message of the show is that what is most important is that you feel comfortable in your own self. Fat-shaming itself, that criticism, is embedded in the DNA of the show,” Holland said.

The show since premiered on Aug. 10, and has given viewers the chance to make educated judgements after actually watching it.

“#Insatiable LITERALLY SHOWS THAT THESE ISSUES EXIST. Literal hardcore truth with no package of a fairytale. It shows EXACTLY what the world is like today. It’s messed up, just like our society and the series show that. There’s no reason to bash it,” Twitter user @embermarina tweeted.

Although the show has only been awarded a 10 percent on rottentomatoes.com, many fans of the show describe how it is a show filled with humor and exaggeration, helping break down body-image issues in society.

According to the National Eating Disorder Association (NEDA), over 10 million women in America have been diagnosed with an eating disorder.

“Anorexia is the third most common chronic disease among young people, after asthma and type 1 diabetes,” NEDA states.

“The best-known environmental contributor to the development of eating disorders is the sociocultural idealization of thinness,” according to NEDA. “Weight stigma poses a significant threat to psychological and physical health. It has been documented as a significant risk factor for depression, low self-esteem, and body dissatisfaction.”

With these alarming statistics about how much society impacts human behavior and body-image, a show that challenges these beliefs might be a small step in eradicating collective beauty norms.