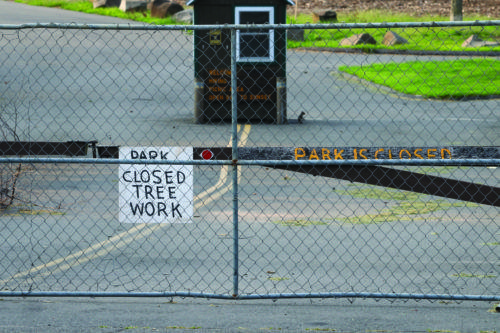 The fall semester is underway, but a staple of Quinnipiac culture is missing. The 32 miles of the Sleeping Giant park and trails are indefinitely closed, as well as surrounding areas near local businesses.

On Tuesday, May 15, a tornado struck Hamden, leaving significant damage to the area including Sleeping Giant State Park.

Classified as an EF1 with maximum winds of 110 mph, the storm left a disastrous path of numerous uprooted and snapped hardwood and pine trees, according to the National Weather Service.

Quinnipiac students have been hiking the giant for years for sport, leisure and to capture the perfect aerial shot of the campus. For those that never got the chance to hike it, the uncertainty of the park’s re-opening is extremely saddening.

“I wanted to climb the Giant the first weekend I was here,” said freshman film, television and media student Andre Leo. “Since we can’t now, I’m excited for when it opens and hope that it will be fully accessible by the time I graduate.” 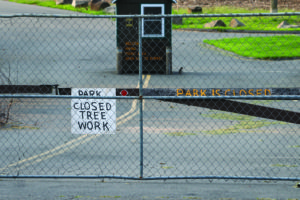 [/media-credit]On Wednesday, May 16, the Sleeping Giant Park Association (SGPA) shared a Facebook post from the Connecticut Department of Energy and Environmental Protection (DEEP) that stated the extensive storm damage to multiple parks throughout Connecticut and announced the closure of Sleeping Giant State Park amongst many others.

Failure to abide by the strictly enforced rules of the closure could result in an infraction or arrest for trespassing, according to DEEP’s official site.

“Throughout the summer months, the staff and volunteers have been working to clear the damage to the park, but unfortunately the repairs are still ongoing,” said Chris Collibee, a spokesman with DEEP.

Collibee said that it is still too early to tell when the opening date will be. Volunteers are actively involved in the cleanup and the staff hears trees and branches falling in the park.

“We would not want a branch or tree to fall on a hiker, potentially harming or killing someone. It’s closed for safety,” Collibee said. “Students need to stay out the park, it’s done so in their interest.”

The SGPA is planning to redesign the parking and picnic area as well as widening the tower trail to allow cars to avoid debris that remain on the trail.

Park supervisor Jill Scheibenpflug said that the storm provides the park new opportunities to change, according to an article by The New Haven Register.

“At some point, you have to come up with a positive side of it, too,” Scheibenpflug told the New Haven Register. “It’s a blank slate and hopefully we’ll make the right decisions and make the park look really nice. It’ll be different, but that doesn’t mean it won’t be nice.”

Through images shared from hikers at the park at the time the storm hit and from those that ventured into the ruins after, the SGPA Facebook page has updated daily the changing status, visuals of affected areas and the enormous task of cleanup that has been ongoing since the disaster.

Since the association is an all-volunteer based friend group, they encourage those that want to help during this time to purchase a membership through their website in which all funds go toward the park. The group is also accepting donations as well as support through sites such as AmazonSmile in which 0.5 percent of the cost of a product goes towards SGPA. In the meantime, the group does what they can until more help can be supplied. 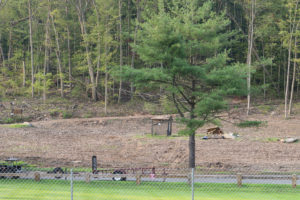 [/media-credit]“We are not State employees, so we are waiting for the OK from those who have a care for safety to get an official go ahead,” an SGPA Facebook post stated. “Right now it’s bulldozer and heavy equipment work – once they have a better sense of what we, as non-state employees, safely do, we will be organizing one or several ‘events.’”

Although the SGPA has taken steps themselves into developing a volunteer based clean-up crew as well as utilizing the staff of the park, Hamden is facing financial stress concerning the overall cost of restoring the town, according to an article by WTNH News 8.

President Trump formally declared New Haven and Fairfield counties in a state of emergency Thursday, Aug. 23, Congresswoman Rosa DeLauro said in an article by WTNH News 8. This means that 75 percent of damage expenses from the storm will be reimbursed by the federal government.

In regards to individual assistance for those who struggled to clear trees and debris from their own property, FEMA (the Federal Emergency Management Agency) has declined to grant reimbursement.

The SGPA encourages its members and visitors to be patient with them as it works through cleanup to bring back a beloved staple to not only Quinnipiac, but the town of Hamden as well.

“We may see a very different Giant when we can hike his trails again, but at his core, he will still be our Giant. Thank for your patience and understanding,” SGPA wrote on their Facebook page.