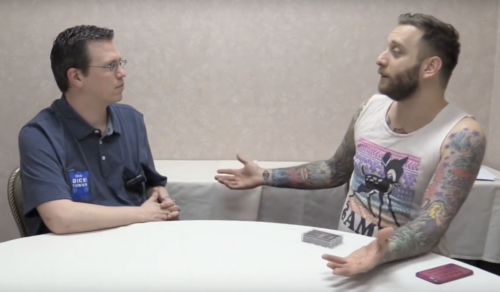 Jeremy Hambly, best known to his online followers as “TheQuartering,” was allegedly assaulted by former Quinnipiac professor of Game Design and Development Matthew Loter on Aug. 2.

Loter was scheduled to teach an Introduction to Game Design class (GDD 101) this fall, until the section was canceled.

TheQuartering has generated a following of over 158,000 YouTube subscribers with 22 million video views by talking about the gaming and comics fandoms, and the world in general.

Table-top game enthusiasts like Loter and Hambly flocked to Indianapolis to attend the Lake Geneva Wargaming Convention (Gen Con), which according to its website, “hosts the largest consumer hobby, fantasy, science fiction, and adventure game convention in North America.”

[/media-credit]Loter saw Hambly outside the Tin Roof Bar in downtown Indianapolis, according to five separately signed affidavits from witnesses that Hambly obtained. Loter asked Hambly his name and after his identity was confirmed, Loter allegedly began physically assaulting the YouTube critic.

Hambly rushed into the bar and Loter was prevented from entering. In rage, Loter punched a window and fled the scene. Hambly suffered from multiple bruises, cuts and a prominent eye injury that caused a blood vessel to pop in his eye, according to the submitted witness testimony.

Gen Con released a statement on the incident stating, “We are investigating the matter further as well, and condemn any acts of violence or harassment. Anyone found to have committed a violent act or a breach of our Ethics and Harassment policy will be banned from attending future Gen Con programming. We plan to resolve this matter as quickly as possible.”

Since the story broke, the University has removed all references to Loter and his class.

“The person in question is not on our faculty and does not teach here,” Lynn Bushell the vice president for public affairs said.

Quinnipiac part-time faculty Adam Pelletier, will be taking over the course, Associate Professor of Entrepreneurship and Strategy David Tomczyk said via email.

“Adam is a game designer himself, and is actually working at two other game design companies while teaching at QU, so you know that he knows his stuff,” Tomczyk said.

Since the altercation took place, Hambly has been diligently discussing the alleged assault on his YouTube, Twitter and live-streaming platforms. In an Aug. 9 video, the commentator discussed the nationally syndicated news websites such as Breitbart that picked up the story.

In an archived Tweet, posted June 5, Loter wrote,“Real talk; if you have a problem with @femfreq being invited to @Gen_Con fucking fight me. I’m easy to find.”

Loter posted under the handle “prettiest_matt” and his name was disguised as “Matt Fantastic.”

Loter has not yet been officially charged. Hambly has raised over $20,000 in crowdfunded money for legal fees.

“Unfortunately there’s not much to be said, except that we are saddened by the events,” shared Gregory Garvey, Quinnipiac professor of game design and development, via email.