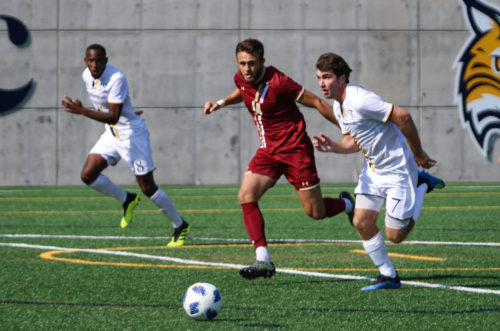 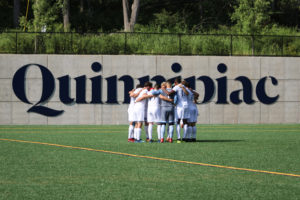 [/media-credit]In the midst of students moving back to Hamden, the Quinnipiac men’s soccer team lost to Boston College in its season opener on Friday afternoon, 2-1.

“I thought the first half was good, just everything except for the scores,” Quinnipiac head coach Eric Da Costa said. “We really didn’t give them much in terms of opportunities. It was just two individual errors from our backline there that just gave them the opportunity to get a clean shot on goal.

Enstrom’s first goal came after a defensive breakdown, as he fired the ball from the right side of the box into the upper part of the net. That goal was unassisted. His second came off a pass from junior midfielder Lasse Lehmann.

“Those type of things shouldn’t happen, but at this stage of the season — not that we expect them — but, it’s not shocking,” Da Costa said.

The Bobcats broke out late in the game after controlling the ball for much of the second half. Da Costa attributed his team’s improved play in the second half to playing with “a bit less respect for them.” He noted that the Eagles are a very good team, but the Bobcats gave them too much respect going in.

With the match appearing to be over, junior forward Eamon Whelan cut the lead in half with under ten minutes to play. Whelan scored on a header off a long cross from sophomore midfielder Paulo Soares. 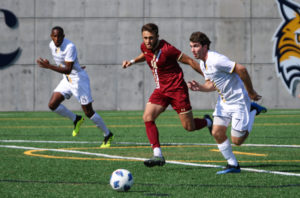 [/media-credit]Whelan, the 2016 MAAC Rookie of the Year, struggled to stay healthy in 2017. He was limited to just 14 games and scored just two goals after putting in 11 his freshman year.

“He’s got some competition this year,” Da Costa said. “I think we’ve got some really nice attacking pieces, but for him to have a good opportunity — I think it was his only clean opportunity — and to put it away, I’m sure he feels great about it.”

The Bobcats had a few chances to tie the game in the final minutes, including a close call by senior forward Rashawn Dally, but Quinnipiac was unable to even the score.

Friday’s game was a microcosm for Quinnipiac’s 2017 season. Last season, the Bobcats faced many of the same problems scoring the ball and getting shots on net. Quinnipiac scored just 18 goals (0.95 per game) and had 94 shots on goal (4.95 per game) in 19 contests. The importance of that first goal late in the game is huge.

“The toughest thing to do in soccer is score goals,” Da Costa said. “It sounds so simple to get a ball to cross a line, but it’s really the most difficult. When you’re creating chances, you’re optimistic that eventually one will fall for you. Getting a goal here and a few in the preseason puts us in a better place.”

The Bobcats will try to bounce back from the loss on Monday at home against UMass Lowell at 3 p.m.

“We just want to see a little bit more of what we saw in the second half today,” Da Costa said. “Just attacking our opponents with a bit more confidence in the first half. We showed in the second half that we’re not far off. UMass will present a similar challenge, but I’m hopeful the boys know they’re capable of competing against those teams.”