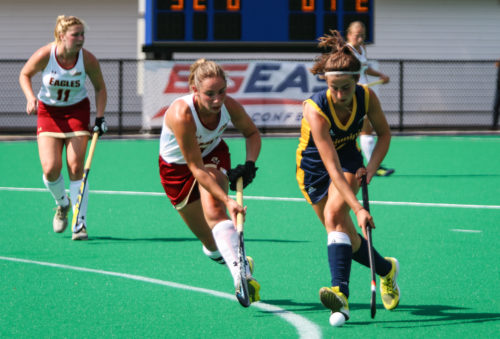 [/media-credit]The Quinnipiac field hockey team lost its season opener Friday against No. 13 Boston College by a score of 7-0. This isn’t just another loss, as Quinnipiac has never defeated Boston College in 15 tries.

Quinnipiac was lead by head coach Becca Main, who enters her 24th season with the Bobcats. When asked about the challenges Boston College gives her team, Main responded by noting that they are used to playing a high level of competition.

“I think when you’re playing an ACC (Atlantic Coastal Conference) team or Big Ten team, you’re dealing with a high level of hockey,” Main said. “The speed of Boston College is a problem for us and our press [defense] was poor until we were able to fix it at half time.

“We let in goals that I would call ‘trash goals’ in terms of what’s bouncing around in front, you didn’t see reverse chips and crazy stuff happening, which is a problem because we were supposed to keep that out of the crease.”

As for the second half, the momentum stayed on Boston College’s side as it scored three more goals to make it 7-0, and had two players score multiple goals.

Quinnipiac also dealt with some off the field challenges, having 11 freshman on the roster and trying to incorporate them into the system. But they still have junior forward Valerie Perkins and senior midfielder Eliza Ruiz Martinez, who were named field managers.

“It was really exciting and an honor to play my first game as a field manager,” Perkins said. “I wanted to step up and set an example for the tone of the game and how it should be played.”

As for the Bobcats, they will have a quick turnaround as they will have to travel up to Vermont on Sunday to play their first road game of the season. Main remains confident in her team being able to make the adjustments necessary in hopes of getting their first win.

“Every game you play is different and what we have to work on for Saturday is being able to play our style,” Main said. “We need to do a lot of film review, because our first three exhibitions went well and easy for us, but playing an ACC team really threw us off our style.”