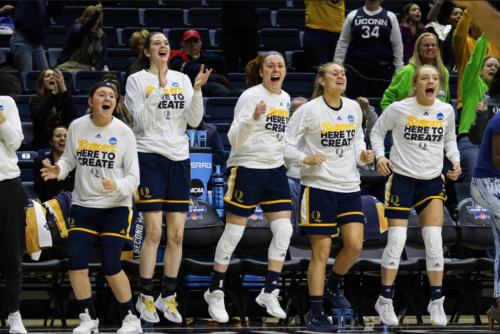 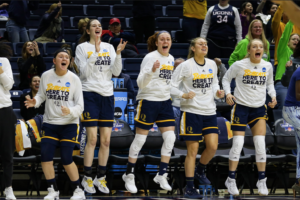 [/media-credit]The Quinnipiac women’s basketball team released its non-conference schedule for the 2018-19 season on Friday, as it looks to return to the NCAA tournament for the third consecutive season.

The defending Metro Atlantic Athletic Conference champs will open the season on Friday, Nov. 9 against the Drexel University Dragons in Philadelphia. The Bobcats will stay on the road in Pennsylvania to take on the Bucknell Bison two days later.

Quinnipiac will then try its hand against the Big East’s Providence College on Thursday, Nov. 15 at Alumni Hall in Providence. The Friars finished last season at 10-21 (3-14 Big East), which was good for ninth in the conference.

The non-conference schedule begins to get a little tougher the following week at the Gulf Coast Showcase in Estero, Florida. The Bobcats will be pinned up against the likes of Duke, Texas, Michigan, Missouri, Washington, Ball State and Fordham. Duke and Missouri both were No. 5 seeds in last year’s NCAA tournament, while Texas (No. 2 seed in the Kansas City region), and Michigan (No. 7 seed in the Lexington region) also made the tournament.

Since the tournament matchups have yet to be announced, the Bobcats could play any of these teams while in Florida.

The focus will then shift to the Ivy League as the Bobcats will take on the Harvard University Crimson on Friday, Nov. 30 in Cambridge, Massachusetts. The Crimson finished last season 18-11 (10-4 Ivy) before losing in the semifinals of their conference tournament.

Quinnipiac will return to Hamden for its home opener on Dec. 2 against Central Michigan. The Bobcats defeated the Chippewas 84-70 in Michigan last season. Central Michigan will prove to be tough test yet again however, as it finished last season 30-5, winning the Mid-American Conference and advancing to the Sweet 16 in the NCAA Tournament.

The schedule continues with two more familiar opponents as Quinnipiac will look to avenge last season’s 60-46 defeat against the Princeton University Tigers on Dec. 8 in New Jersey.

After a week off, the Bobcats will then return home to face the Richmond University Spiders on Dec. 19. They beat Richmond handily last season, 81-65.

The non-conference schedule wraps up on Sunday, Dec. 30 in Hamden as the Bobcats will take on the University of Central Florida Knights. The Knights finished last season in third place in the American Athletic Conference before falling to the University of South Florida in the conference tournament semifinals.

The Bobcats will look to defend their MAAC title after that as the schedule moves into conference play. With the return of rising seniors and First Team All-Conference selections Aryn McClure and Jen Fay, Tricia Fabbri’s will be poised to find themselves atop the MAAC again come March.

Quinnipiac will release its conference schedule in the coming weeks.