The Quinnipiac Chronicle • May 27, 2018 • https://quchronicle.com/63479/news/sleeping-giant-state-park-closed-indefinitely-after-tornado-damage/ 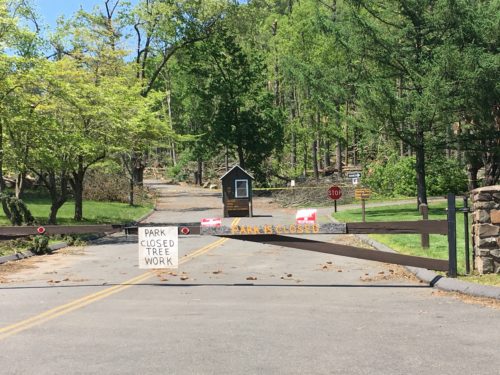 Sleeping Giant closes park after tornado destruction, including an abundance of trees down or broken.

Jessica Ruderman
On Tuesday, May 15, a tornado struck down in Hamden leaving significant damage to the area including Sleeping Giant State Park, which has been declared closed until further notice.

Classified as an EF1 with maximum winds of 110 mph, the storm left a disastrous path of numerous uprooted and snapped hardwood and pine trees, according to the National Weather Service.

Although Quinnipiac University has faced significant damage to the heavily wooded areas around the school, the hardest hit came across the street at Sleeping Giant State Park.

On Wednesday, May 16, the Sleeping Giant Park Association, SGPA, shared a Facebook post from the Connecticut Department of Energy and Environmental Protection, DEEP, that stated the extensive storm damage to multiple parks throughout Connecticut and announced the closure of Sleeping Giant State Park amongst many others.

The 32 miles of park and trails are now indefinitely closed as well as surrounding areas near local businesses. Failure to abide by the strictly enforced rules of the closure could result in an infraction or arrest for trespassing, according to DEEP’s official site.

“With the Park being closed, no one should be in any part of the Park. This includes the open field between Wentworth’s and Barese,” an SGPA Facebook post stated. “ If you see something … say something!”

Through images shared from hikers at the park at the time the storm hit and from those that ventured into the ruins after, the SGPA Facebook page has updated daily the changing status, visuals of affected areas and the enormous task of cleanup that has begun.

Since the association is an all-volunteer based friend group, they encourage many others that want to help during this time to purchase a membership through their website in which all funds go towards the park. The group is also accepting donations as well as support through sites such as AmazonSmile in which 0.5% of the cost of the product goes towards SGPA. In the meantime, the group does what they can until more help can be supplied.

“We are not State employees, so we are waiting for the OK from those who have a care for safety to get an official go ahead,” an SGPA Facebook post stated. “Right now it’s bulldozer and heavy equipment work – once they have a better sense of what we, as non-state employees, safely do, we will be organizing one or several ‘events’.”

Although the SGPA has taken steps themselves into developing a volunteer-based clean-up crew as well as utilizing the staff of the park, the town of Hamden is facing financial stress concerning the overall cost of restoring the town, according to an article by WTNH, News 8. The article states that if FEMA (the Federal Emergency Management Agency) does not declare that the tornadoes fit the requirement of ‘state of emergency,’ Hamden will have to work with the state over the next two years to pay off the expenses.

In light of the recent tragedy, many are sharing their memories of past experiences at Sleeping Giant on Facebook in honor of Memorial Day Weekend, what should have been the opening weekend for the park. The SGPA encourages its members and visitors to be patient with them as they work through cleanup to bring back a beloved staple to not only Quinnipiac but the town of Hamden as well.

“We may see a very different Giant when we can hike his trails again, but at his core, he will still be our Giant. Thank for your patience and understanding.”

The re-opening of the park is unclear at this time but is not expected anytime in the near future.