The Quinnipiac Chronicle • May 6, 2018 • https://quchronicle.com/63465/sports/quinnipiac-baseball-secures-2-1-series-win-against-niagara/ 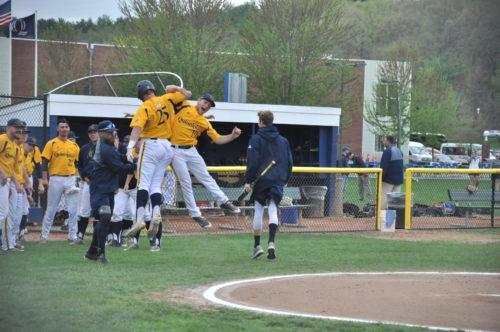 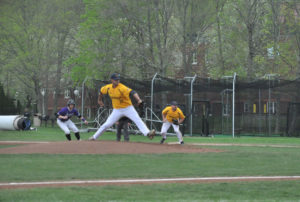 [/media-credit]After losing its five MAAC-series winning streak last weekend to Iona, the Quinnipiac baseball team bounced back and took two out of three games against Niagara this weekend.

“Honestly it’s been happening all year,” senior pitcher Taylor Luciani said of the play of his team. “I love playing for the guys behind me and they had my back. It just shows how good we can be when we are firing on all cylinders.”

In the first game on Saturday, the Bobcats got their sluggers going, as both senior infielder Ben Gibson and junior outfielder Liam Scafariello each hit home runs early. Gibson hit his 13th of the season in the first inning to get the scoring started, a solo shot to put the Bobcats up 1-0. Scafariello then hit his 10th home run in the fourth inning, a two-run home run to break a 1-1 tie.

A three-run sixth inning would put the Bobcats up 6-1 and despite a couple late runs by Niagara, the Bobcats held on to win 6-3. Luciani went eight innings, picking up his eighth win on the season in the process. Senior closer Mike Davis recorded his fifth save on the year, his 14th career save, which is now a school record.

“If you’re able to get a lead going into the seventh inning or eighth inning, for us it feels like the game’s over,” head coach John Delaney said. “Because Mike [Davis] has been so good.”

The second game did not go as well for Quinnipiac. Graduate senior Brandon Shileikis was knocked around by the Purple Eagles, giving up 16 hits, nine runs and seven earned runs through 5.1 innings. It was the most hits Shileikis has given up this season.

Senior infielder Owen Dziados led the way for Niagara, going 3-for-5 with four RBIs, followed along by junior infielder Greg Cullen and senior outfielder Wyatt Olson, who each had two RBIs.

Quinnipiac had the long ball going again, as junior outfielder Brian Moskey, sophomore infielder Evan Vulgamore and Scafariello each hit home runs. However, the offense of Niagara outdid the efforts of the Bobcats and Niagara evened the series with a 10-6 victory.

“We did a lot of work in the cages this week with coach,” Scafariello said. “Anybody can get a hit at any point in time on our team.”

On Sunday, it was a dominant performance on the mound by junior Tyler Poulin that propelled the team to an 8-1 victory. Poulin went seven innings, giving up only six hits and one earned run.

“It was a very big outing, very big for the team,” Poulin said. “The boys came to play today. I brought what I had, brought my best and really helped me bounce back from a couple tough outings.” 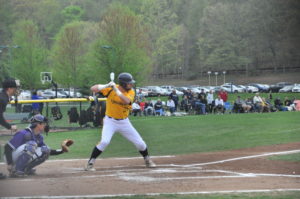 [/media-credit]Scafariello homered in the second inning, a no-doubter to left, his 12th on the season and third of the weekend. After Niagara tied it in the fourth on a double steal, the Bobcats capitalized on a couple of errors by Dziados, bringing in three runs and regaining the lead, 4-1.

The Bobcats never looked back from that point, as both Gibson and Vulgamore knocked in runs in the seventh. Gibson ripped a two-RBI double, and then Vulgamore followed with a double of his own to bring in Gibson. An error by Niagara’s senior outfielder Trevor McCauley on a Scafariello fly ball brought in Vulgamore right after and Quinnipiac maintained that 8-1 lead for the rest of the game.

“When we have threats like that in the middle of the order, it’s pick your poison,” Delaney said in regards to Gibson, Vulgamore and Scafariello. “Those three guys, it’s hard to pitch to those three guys when they’re all on point. And this weekend, all three guys put together good at-bats. They stepped up in big opportunities and brought in some runs.”

Quinnipiac now will shift its focus to Marist, a team that is tied for second in the MAAC and also are the defending champions.

“This is the weekend that proves everything,” Delaney said. “Now you got two of the best teams in the league facing each other, and that’s what this league is all about. Our guys are prepared for it, they’ve been working hard for this the entire season, and nothing’s different. Just stay doing the same stuff, it’s just another weekend for us.”