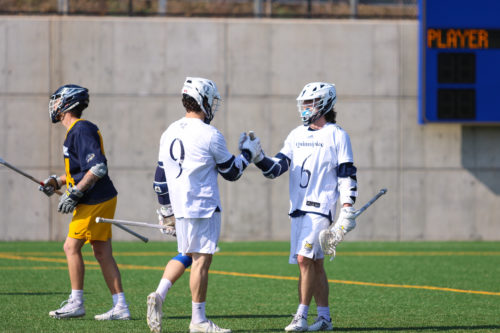 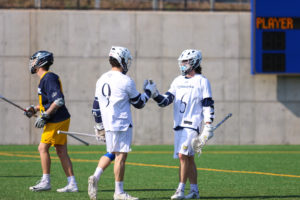 [/media-credit]In just a year’s time, Quinnipiac’s men’s lacrosse team has bounced back from a disappointing 2017 season and returned to the Metro Atlantic Athletic Conference (MAAC) tournament for the second time in the last three seasons.

The Bobcats (9-5 overall, 6-0 MAAC) are coming off a year that saw them post only one win in the MAAC and two wins overall.

“I think you always come back hungrier after a season like that,” senior long stick midfielder Adam Bellamy said. “We all just kind of came together and said that that couldn’t happen again. We have such a big senior class and we had success in 2016 and we kind of just as a senior class stepped it up and decided that we needed to lead and it’s really helped out.”

The team came into the heart of MAAC play riding a two-game losing streak and a 3-5 out of conference record. In addition, the team’s starting goalie at the beginning of the season, senior Carson Cocco, struggled and eventually fell to injury. This opened the door for sophomore goalie Joe Zukauskas to step between the pipes.

“[Zukauskas] stepped it up big time,” Bellamy said. “Wasn’t really sure who was going to step into the role…we all had a lot of confidence in [him] and this year [he] really stepped into that role. Being a sophomore to step in to that role and really be the backbone of the operation in the net like that, it’s been awesome.”

Paving the way for the Bobcats’ success this season has been their top attacking line of freshman Jake Tomsik and juniors Foster Cuomo and Mike Fletcher. The trio combined for 82 goals on the campaign and 129 points.

Another major contributor who has flown under the radar since scoring his 100th career goal has been senior midfielder Brian Feldman. Feldman has 28 goals on the year to go with 30 points as well as a team-leading five goals on the man-up.

Despite all of the power up front, it is commonly said for not just lacrosse, but all sports, that defense wins championships. That couldn’t be more true for the Bobcats.

It starts with the man taking the faceoff, senior midfielder Will Vitelli. Vitelli has won three MAAC Defensive Player of the Week honors and the MAAC Faceoff Specialist of the Year  last year. He is having a career year in terms of his faceoff percentage, which just as his career percentage, over .500. He also has a career-high 74 ground balls, which leads the team.

On the backend, it’s senior defenseman Riley Palmer that is anchoring the Bobcats. Palmer sits third on the team in both ground balls with 34 and caused turnovers with 15. 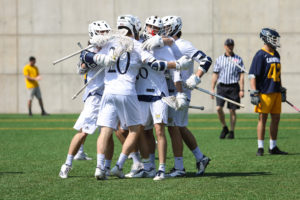 [/media-credit]“For what we do is 132 days a year, we play 18 games, we practice 115 days a year and Riley’s been the first guy on the field probably all 115,” head coach Eric Fekete said. “He’s a captain, he’s a four year starter and his play this year has transcended anything he’s done in the past.”

The No. 1 Bobcats are set for a date with the No. 4 Canisius Golden Griffins on Thursday, May 3, both hoping for a chance for a shot to be kings of the MAAC. The Bobcats and the Golden Griffins last played on the Bobcats’ senior day when Quinnipiac recorded a season-high in goals in a 19-14 win.

Over the past five seasons (including the 2018 season), the Bobcats are 4-2 against the Griffs, including a win in the MAAC tournament.

“They have a couple of really good guys,” Bellamy said. “[Senior attack Connor Kearnan] on Canisius, he’s the points leader in the conference. We’re really going to have to put some pressure on him.”

“I think we talk a lot about navigating the course every game,” Fekete said. “You can’t really control how the game breaks but you have to be able to handle any kind of scenario… We practice those things pretty regularly during the course of the practice week.”

If the Bobcats win on Thursday, then they will play the morning of Saturday, May 5 against the winner of No. 2 Detroit Mercy and No. 3 Monmouth.

“We talk a lot about ‘you have to control the game or the game will control you,’” Fekete said. “I think we try to control it as much as we can irrelevant to where it is in the scenario.”