The Quinnipiac Chronicle • May 2, 2018 • https://quchronicle.com/63369/news/campus-administration-shuts-down-student-run-company/ 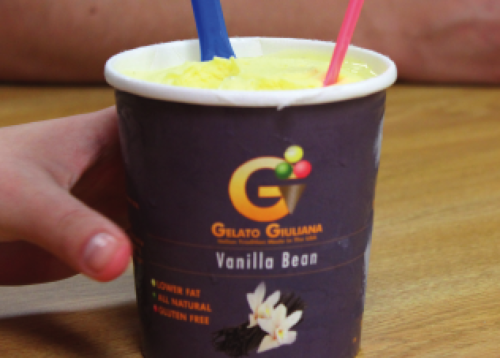 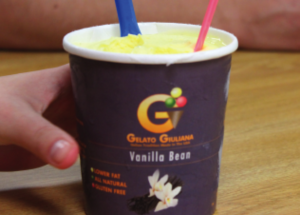 [/media-credit]After weeks of operating on campus, Gelato Q was shut down by administration after they were found to be in violation of Article 17 of the student handbook at the end of March.

Gelato Q was a gelato delivery service that was founded by freshman entrepreneurship major student Michele De Palo and sophomore marketing major Chris LoMonaco. The company was founded during the beginning of spring semester, and their first sale of gelato occured on February 20.

The two students provided market premium homemade Italian gelato to various students, organizations and members of greek life. The company gained recognition through their Instagram page. Within three weeks, the Gelato Q Instagram account went from 23 to 500 followers according to LoMonaco.

Advertising was done primarily through word-of-mouth and through various social media promotions on the Instagram page. Within its first few weeks, the company made hundreds of deliveries and were able to break even from out-of-pocket expenses.

They were looking to become a presence on main campus with possible expansion to the York Hill and North Haven campuses as well as other nearby colleges.

De Palo and LoMonaco were instructed to halt operations in late March due to various discrepancies between their selling of gelato and Article 17 of the student handbook. Their last official Instagram post was on March 14 according to the account, @_gelato_q.

“Unfortunately, we were told that we were going against Article 17 of the student handbook which says that you’re not allowed to solicit or market on campus without school permission,” LoMonaco said.

When LoMonaco and De Palo were informed of this, they sought to receive proper approval from the university. Campus administration has asked for specific paperwork from the town of Hamden and various government bodies to obtain health permits and insurance papers since the gelato is from distributors in New Haven.

They have reached out to administrators from the Auxiliary Office, Student Affairs and the School of Business in order to be granted approval.

The two have begun this process hoping that they would be able to receive approval by August, but they have faced difficulties getting the proper permission from administrators. As a result, De Palo and LoMonaco have reached out to various entrepreneurship professors for advice to bring their company back to campus for fall semester.

“Basically for us to continue what we are doing, we have to establish ourselves as an outside organization like Dominos or Falcon,” De Palo said. The enterprise needs to be established to be properly allowed to sell their products on campus.

Students were shocked to find out that De Palo and LoMonaco were no longer allowed to continue operations. Many believe that it is a great idea that will help bring attention to Quinnipiac and the school’s prestigious entrepreneurship department.

“I think this would be awesome to have on campus because who doesn’t like gelato?” Jenna Hobgood, a sophomore film, television and media arts major said. “They get to learn more about business, and we get a nice dessert. It’s a win-win situation. I think it’s a great idea.”

Other students feel the same way about a gelato delivery company serving students on campus.

“I think this would be cool to have on

campus because it’s something different,” Danielle Macedo, a sophomore health science studies major said. “You don’t hear of many schools that have gelato delivery. It’d be a nice change from what is typically offered in the cafeteria. And, you can’t go wrong with gelato.”

While Gelato Q has currently stopped operations, it does not stop De Palo and LoMonaco from trying to bring their idea to the Quinnipiac community.

“We are providing a service to students on campus that we don’t currently have otherwise,” LoMonaco said.

The two founders have stressed that they are determined to receive proper approval from the university and hope that they will be able to resume operations in the coming semesters.