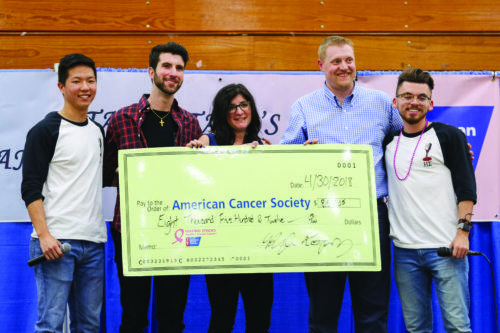 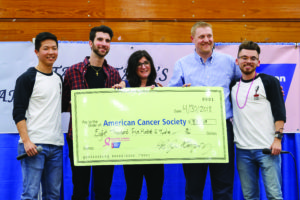 [/media-credit]Sometimes acting like a fool can be a good thing, especially when it is done to bring joy to other people. It can be even more beneficial when foolishness offers relief to those dealing with challenging issues in their lives.

The Beta Theta Pi fraternity uses this concept to run their annual philanthropy event, Stand up to Cancer, which uses the power of comedy to raise money for The American Cancer Society. This years event was held in the Burt Khan Auditorium on April 30 at 9 p.m.

Beta Theta Pi’s earned a total $8,512.08 for The American Cancer Society from the $5 entry fee, plus payment for Beta Theta Pi’s personalized merchandise like shirts and stickers, and from ordering slices of pizza and Moon Rocks gourmet cookies.

Freshman mechanical engineering major and member of Beta Theta Pi Cory Sala said this event has been held in previous years and students have volunteered to participate in order to benefit The American Cancer Society.

“It’s all stand-up comedy and we have members from other student organizations come and perform. I do know that we have a representative from Beta performing and also a few from other fraternities and sororities,” Sala said.

Junior economics major and President of Beta Theta Pi James Burnham said that this is the fourth year Stand up to Cancer has been held at the university.

“We’ve always had a strong relationship with [The American Cancer Society] in the country, and possibly the world,” Burnham said. “This event is one of my favorite things that I do for this organization. I’m very proud of it.”

For Burnham, this is a unique fundraiser compared to other Greek life events at the university.

“We really think it stands apart from other organizations’ events because the message behind why we do this is very strong. We always say that cancer affects everyone, whether it’s directly or indirectly. You ask anyone to raise their hand if they’ve been affected by cancer in some way, 98 percent of people raise their hand,” Burnham said.

Stand up to Cancer gives people an opportunity to have a good laugh during hard times, according to Burnham.

“It’s good to give people the environment to have a good time and see their friends and making jokes and making a fool of themselves sometimes, because it’s all going to end up as a fun, positive memory,” Burnham said.

Ten performers from different university organizations contributed to putting a smile on the student body’s faces as they joked about their personal experiences that varied from rocky romantic relationships to the fear of getting pregnant, even to being cursed by a witch.

Through all of the humor, audience members also recieved free pamphelts providing information on the American Cancer Society that ddressed subjects like maintaining good health. A representative of the organization also spoke on stage about her story as a breast cancer survivor.

Junior health science studies major Molly Davis said she had a good time attending this event because Beta Theta Pi uses it as a way to help others.

“Beta is one of my favorite fraternities and I spend a lot of time with them, so a lot of them are my friends. I really wanted to come and help support this amazing cause. I think everyone came here knowing that it was for a great cause,” Davis said.

Throughout the stand-up portion of the event, there were three judges who gave points to each participant on their performance to determine the top three winners of the night. The culmination of points resulted in a three way tie for second and third place. The competitors were freshman Hannah Bernhard from Gamma Phi Beta, junior Lauren McGrath from The Barnacle newspaper, and junior Joseph Iasso from Alpha Sigma Phi.

The tie caused Beta Theta Pi to think on their feet and proceed to conduct a “joke off,” where each of the students had to come up with a joke on the spot and whoever received the most laughs would be placed in either second or third place. In the end, Bernhard placed third place and McGrath second place.

As for first place, junior mechanical engineering major and member of Eta Pi: Engineering Honor Society Andrew Koukoulas snatched the win for the 2018 Stand up to Cancer event . His performance talked about the hilarity of his family life, including how his father would often drill him with questions along with annually posting awkward pictures of him online on his birthday.

Koukoulas said this was his very first time performing for this event.

“I was just kind of a shy kid actually. I was never really out there and so pretty much I figured, you know this a one shot thing. It’s for a good cause,” Koukoulas said. “Just give it a shot, see how it goes, because I enjoy making people laugh, making people happy. I really didn’t care if I won at all, I just wanted everyone to have a great time.”

Koukoulas said he would not mind trying stand-up again since he felt very comfortable on stage talking about his family antics.

“That’s my life,” Koukoulas said. “It’s so usual in my life and I’m able to make a comedy scene out of it. I figured, why not share that with everyone else and make everyone else laugh from those experiences?”