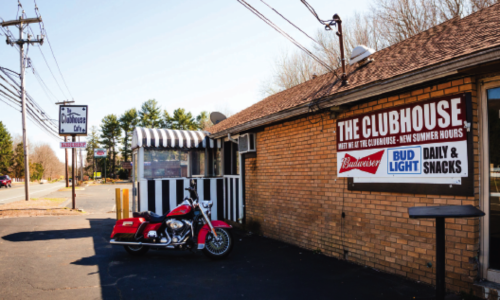 Quinnipiac students were without their dollar beer fix this past Wednesday, as the popular biker bar Clubhouse had its doors shut by the state of Connecticut.

The Bobcat watering hole, located at 3816 Whitney Ave. in Hamden (a two minute drive from Quinnipiac’s Mt. Carmel campus, according to Google maps) was closed from Monday, April 16 through Thursday, April 19.

Clubhouse on Whitney reopened on Friday, April 20, only to be raided by police sometime around 11 p.m, according to reports from bar goers.

Officers entered the bar from multiple entrances, and carded anyone inside or trying to leave the bar. IDs were confiscated, and police cross referenced names with Quinnipiac public safety records, confirming who was 21 and who was underage. According to one officer, the raid was prompted by the state.

Tony Dandonoli, owner of Clubhouse Cafe, said that while he doesn’t believe any students will be in trouble after Friday night, he will be fined $38,000, and most likely face another suspension in the coming months.

“If they were going to give out tickets, they would have on Friday,” Dandonoli said. “The biggest risk and liability is basically me.”

This comes after a $1,500 fine and a three day liquor license suspension earlier last week, according to the Connecticut Department of Consumer Protection Liquor Control Commission.

Last week’s closure and fines resulted from the state finding eight separate health and safety code violations during an inspection last fall, according to Dandonoli.

Those violations include: cafe permit, permit to be recorded, sanitation, age statement forms, restrictions on drink promotions, daily records, sale to minor and minor in barroom.

While some of these are self-explanatory, others are pretty technical.

For example, Clubhouse violated the cafe permit, because in order for a bar to be called a cafe, it must offer food available to its customers, something the Clubhouse Cafe does not.

It should be noted that the Quinnipiac Valley Health District, which assigns health ratings to all establishments in the area, rated The Clubhouse Cafe with a ‘B,’ on a scale ranging from ‘C’ to ‘A.’

Dandonoli says that local law enforcement targets the area, and his bar in particular.

“There’s a task force and that’s what they do,” Dandonoli said. “They target the school areas. And we’re one of the busiest places.”

Dandonoli wasn’t the only one with thoughts on the matter. Quinnipiac students certainly had a lot to say about the closure and raids as well.

Freshman undeclared business major Alexandra Alvarez said that she was “heartbroken” that her Wednesday night outing had to be postponed, despite the obvious problems with the bar.

“I mean, the place is gross,” Alvarez said. “And people probably shouldn’t go with all the violations. But I know they will because it’s the closest. Where else is there? It’s so easy and fun.”

Alvarez continued by voicing her concerns as to whether or not last week’s closure will result in stricter enforcement of underage drinking.

“I’m nervous that they’ll be more strict with which fake IDs they accept,” Alvarez said. “But that’s how they get most of their business, so I think it’ll be fine.”

Alexandra Lanzillotto, a senior computer science major, said that the underage clientele will not be too troubled by the violations.

“The people who I know who are under 21 bleed Clubhouse,” Lanzillotto said. “It’s disgusting there, but there’s nowhere else local for them, so they just don’t care.”

Brian Pierce, a sophomore accounting major, reflects Lanzillotto’s thoughts, explaining that he doesn’t believe this situation will change anything for Clubhouse or its customers.

“I don’t really think anything of it,” Pierce commented. “Anywhere underage kids go are going to have the same type of violations, it’s just that Clubhouse was targeted and caught.”

Dandonoli says that although there may be some underage bar goers, Clubhouse is a safe place to spend a weekend night.

“If someone thinks that a college student isn’t going to touch alcohol, they’re just wrong,” Dandonoli said. “If it’s not here, it’s a frat party or on campus. But here, safety and wellbeing is always our biggest concern.”

Dandonoli says that he’s even hired a bus to bring students back to Quinnipiac for free, and is petitioning to the town of Hamden to install light fixtures along the greenway to provide a safe place for students to walk back to campus.

And despite last week’s setbacks, Clubhouse Cafe will have its doors open this coming May Weekend.

“Valid IDs are always welcome and it’s business as usual,” Dandonoli said. “We have three open bars booked and seven DJs booked for Saturday. It should be a lot of fun.”