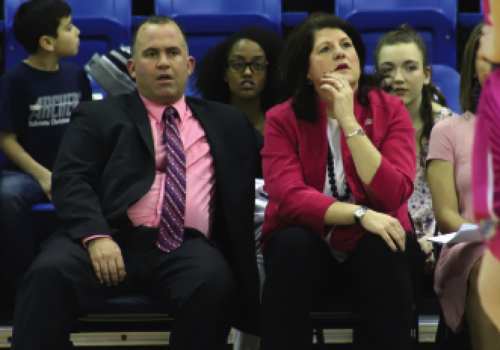 MacGillivray, a Philadelphia native and 1996 Temple University graduate, was promoted to associate head coach in the summer of 2015 and helped lead Quinnipiac to seven consecutive 20-win seasons and three trips to the NCAA tournament, including a Sweet 16 appearance in 2017.

“I am honored to have the opportunity to coach at La Salle University,” MacGillivray said via a press release. “The challenge of building a championship program at this proud and historic University is thrilling and I am excited to get started.”

“We are excited to welcome Mountain back home to Philadelphia as he takes over leadership of our women’s basketball program,” La Salle Director of Athletics Bill Bradshaw said via a press release. “He’s been a key member of an exceptional program at Quinnipiac over the last few years and has been an integral part of their success both in recruiting and game preparation. His deep roots in Philadelphia high school basketball will help attract the top local talent from the area to La Salle.”

“It is rare in this business to get a coach on staff who cares about the program with the same attention to detail that you do,” Quinnipiac head coach Tricia Fabbri said via a press release. “For the past nine years, Mountain has been that coach. We’ve experienced unprecedented success here during his tenure and he bears a great deal of responsibility for that from the recruitment of next level student-athletes that we’ve had to their remarkable development as both people and players.”

MacGillivray came to Quinnipiac after spending two seasons as an assistant coach at the University of New Hampshire. Prior to that, he spent 11 years at Archbishop Carroll High School in Radnor, Pennsylvania and helped turn them into one of the most successful prep programs in the country.

“I can’t overstate what he’s meant to the improvement of this program and the impact he’s had on my life,” Fabbri said via a press release. “I’m proud to have had him as a colleague and privileged to call him a friend.”

MacGillivray will succeed Jeff Williams at La Salle, whose contract was not renewed after eight seasons with the Explorers.