One man, one goal 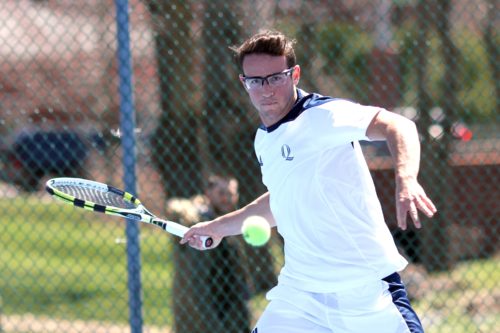 [/media-credit]Have you ever competed against somebody who wants to win so badly that their challenge pushes you to your absolute limit? Those of us who follow sports can match that description with Russell Westbrook or Tom Brady. Their attitude is a dominant force where it is clear that they’ll do whatever it takes to win.

For Quinnipiac men’s tennis, that persona sounds familiar. On the courts, the Bobcats will tell you it is senior Julian Rozenstein who embodies that presence of peak competition and winning.

“[Rozenstein’s] the guy [where] if you draw him you’re like, ‘Oh no, I don’t want to face him,’” senior teammate Kyle Alper said.

After all, Alper knows what it’s like being across the court from Rozenstein. They became friends nearly ten years ago when they first played each other in tournament play. Alper didn’t say who won that first match, but I think we can guess.

Luckily for Alper, he and Rozenstein have been teammates for the past four years at Quinnipiac and no longer face off in official competition. On the other hand, that doesn’t count out their friendly games during practice.

“Whenever I get on the court with [Rozenstein] I don’t know what [I’m] going to get. He’s very unpredictable and he likes to lighten the mood,” Alper said. “But as soon as you get out there practicing, he’s going to be the first one to get on your back to work [harder]. I think that’s something that the team will miss going forward, there’s going to be no one like [Rozenstein].”

Rozenstein undoubtedly sustains a fire to win within him, but he also possesses a will to push himself harder in preparation. That’s why for Rozenstein, pure competitiveness isn’t enough, Quinnipiac men’s tennis head coach Chris Pappas acknowledges.

“He has improved so much physically and skill-wise, but he’s always had that will to win,” Pappas affirmed. “Every year [Rozenstein] has taken a big step forward and never was satisfied for less than [making leaps] forward, and he has always come through, so I’m really impressed and proud of not only how he’s grown in four years, but also the consistent growth he’s had in his time here.”

It’s no wonder Rozenstein has gotten his name to the second spot on the all-time career wins list in program history, behind his former teammate Kei Ezaka (‘17).

As for where his aggressive mentality comes from, Rozenstein credits his heritage.

“[The winning mentality] is definitely a natural ability mixed with a lot of training,” Rozenstein said. “I grew up with a tough mentality too. Both of my parents were immigrants [from Russia], so I was taught to work hard from a young age.”

In Rozenstein’s final year representing Quinnipiac tennis, his infectious drive has resulted in a perfect 6-0 singles record against MAAC competitors up to April 20. His play has not gone unnoticed either, as he is in top consideration for MAAC Player of the Year.

Moreover, Rozenstein plays in both singles and doubles matches for the team, yet he considers himself a stronger singles contender at the end of the day. Regardless of his individual based trials, his priority has always been linked to team success.

In fact, Rozenstein’s focus hasn’t wavered since the 2016 MAAC Championship match against Monmouth. In that particular postseason finale, he and his teammates could practically taste sweet victory, but in the end they went home empty handed after dropping a final match for the set, 4-3.

“My ultimate goal is to help the team win the championship. We’ve never won the MAAC Championship,” Rozenstein said. “Three years of playing in the [MAAC Tournament] and never lifting that trophy, it’s definitely disappointing. I think that’s going to change this year, we’ve all been working really hard and it would mean a lot to me if we could finally [win].”

Four years in the books as the head coach, Pappas has watched Rozenstein grow from a thin unproven freshman into a mature leader. That’s why Pappas is not shy about acknowledging Rozenstein’s importance to the program.

“[Rozenstein] is a winner. He works his butt off on the court… He just wants it more than his opponent,” Pappas said. “[Rozenstein] leads by example in terms of how to go about his business. He gives [the team] so much confidence, because the guys look to him as that guy who is going to come out and get us a win and we know if somebody doesn’t get a win, somebody really had to earn it.”

Winning at the collegiate level didn’t come easy for Rozenstein. Coming in as a freshman, he was immediately matched against older, more experienced players and had to earn his 20-7 singles record the hard way. 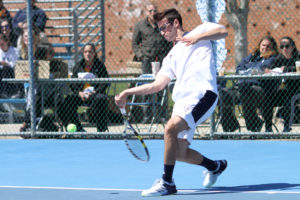 [/media-credit]“Competition is definitely a lot tougher in college,” Rozenstein said. “When I came in as a freshman, I was playing against guys who were 20 to 21 years old, so it’s a lot different. But I overcame that by working hard every day.”

Rozenstein has been no stranger to adversity and perseverance throughout his time at Quinnipiac. According to Pappas, Rozenstein is comfortable taking on challenges like facing the opposing team’s lead player.

“Rozenstein has been out there and lost on the first set or has been down big in the first set, and I’ll go over there and talk to him,” Pappas recalled. “[Rozenstein] very lightheartedly will joke around with me a little bit and say, ‘I got this. We got this. I’ll turn it around.’ I’ve always appreciated how he is able to stay in the present and is able to laugh it off and then come back focused, [ready] to take care of business.”

In tennis, being able to outlast your opponent can often times mean hours of heated match play consisted of fatiguing rallies. These are scenarios where one miniscule error can change the momentum of the rest of the match.

Although the tennis environment calls for physical endurance, most players credit mental fortitude as the true necessity to win in the sport. Alper claims Rozenstein’s ability to thrive under pressure in game situations is thanks to a unique combination of “mental toughness” and persistence.

“[Rozenstein] is willing to work until he gets peeled off the court. There’s been many times where he works himself to exhaustion,” Alper mentioned. “But a lot of times the other guy gives out first.”

While sports fans and athletes can agree there’s no easy road to success, few understand how much training goes on before triumph. To go out and compete at a high level and continuously succeed in a fluctuating game like tennis takes a special athlete.

When things aren’t going his way, Rozenstein relies on an attitude and confidence to transcend his competition that only results from relentless hours of training and preparation.

“I have good days and I have bad days. Some days are just terrible [on the court],” Rozenstein admits. “I just find a way to win. You know, if [I’m] playing ugly, whether its playing a completely different style in the match… You just have to get used to it, that’s life. You have to overcome those barriers.”

Over his previous three seasons at Quinnipiac, Rozenstein has proved his success with three consecutive seasons with 30 or more overall victories.

With May around the corner, Rozenstein’s career at Quinnipiac is quickly approaching its conclusion. With closure on his mind, he had a curious perspective for my last question.

“What was your best moment playing at Quinnipiac?”

“Until I win a championship, I don’t have one,” Rozenstein responded, determined as ever. “It’s still to come.”

Rozenstein will be competing with his team in the coming weeks as they begin their quest to win a championship in the MAAC Tournament on Saturday,April 28.