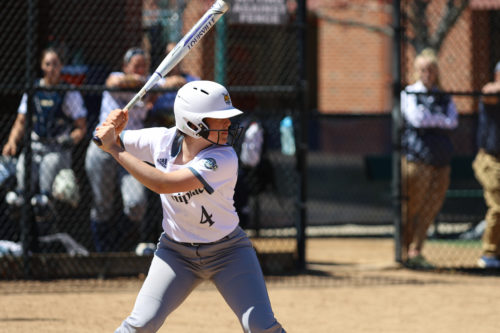 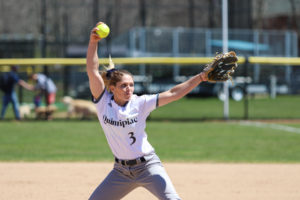 [/media-credit]While it was a sunny Sunday afternoon in Hamden, the Quinnipiac softball team has seen brighter days as it lost both of its games against the Monmouth Hawks by scores of 8-0 and 7-3.

Quinnipiac (19-25 overall, 7-7 MAAC) went into today looking to string together a couple victories after splitting games yesterday at Siena, while Monmouth (21-14 overall, 11-1 MAAC) came into the games having just lost its 13-game winning streak that put the Hawks at the top of the MAAC.

“We knew today was going to be a tough competition,” Quinnipiac head coach Jill Karwoski said. “I told [the team] we need to play the best in order to be the best, so we’ve got a lot to learn.”

Leading the way in game one was Monmouth senior pitcher Amanda Riley, who threw a complete game shutout, giving up only two hits to the Bobcats. It was Riley’s 13th win on the season, closing the gap between her and her opposing pitcher in this one, Quinnipiac senior Casey Herzog, who leads the MAAC with 15 wins.

“Riley’s been having an outstanding year in the conference,” Karwoski said. “And they have a strong defense behind her.”

The score was only 3-0 heading into the 5th inning, but a bases-clearing triple by freshman outfielder Katie Harrington blew the doors open and Monmouth would go on to win the game 8-0.

Herzog’s performance was arguably her worst on the season, as she gave up seven earned runs and 11 hits, which were both season highs.

“[Monmouth] can hit unconventional pitches,” Herzog said. “Pitches that were in close to the dirt, they were still taking pretty long.”

In game two, Monmouth got the long ball going early as sophomore outfielder Sam Tomasetti hit junior Kendall Brundrett’s second pitch of the game out of the park for her first of two home runs on the day. In the second inning, it was senior catcher Alex Holzman who took Brundrett deep, and the Hawks eventually built a 7-0 lead by the 5th inning. 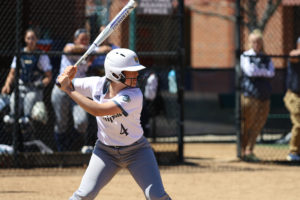 [/media-credit]Quinnipiac was able to get three runs across thanks to a two-run double by senior catcher Lexi Courtney, followed up by an RBI single by freshman infielder Brighid Douglas. But the comeback would fall short as Monmouth held on to win 7-3.

“Today in the second game, [the team] showed a lot of fight,” Karwoski said. “I think we had a couple opportunities to even up the score, we just didn’t capitalize, especially with runners in scoring position.”

Quinnipiac has six remaining games in MAAC play and currently sits seventh in the standings. The team’s next games will be against Fairfield, a team currently in third.

“[The team] knows they have a lot left to accomplish,” Karwoski said. “We know we have a lot of opportunities coming up. We know we can put all of our efforts into Fairfield this week and try and get two from them.”