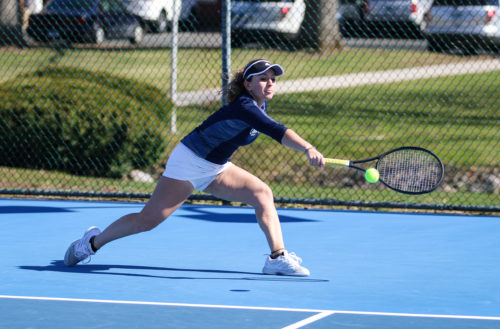 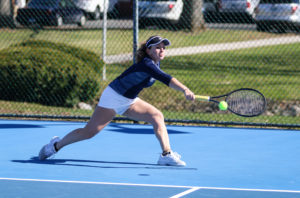 [/media-credit]The Quinnipiac women’s tennis team was defeated by Middlebury (10-2) on Friday in Hamden by a score of 4-3.

For a team that’s won 45 straight MAAC matches, is 8-0 in MAAC play for the fifth year in a row and has clinched the MAAC, head coach Paula Miller only sees this loss as a learning experience heading toward the MAAC tournament.

“It’s great to have someone that’s a little bit higher level competition and we knew this was going to be a tough one,” Miller said. “We went three sets in five matches and we were right there with them and we wish it went our way, but it’s to get us ready for next weekend.”

Quinnipiac had two players accomplish a milestone on Friday. Those two players were the oldest on the team in juniors Jennifer Lu and Proyfon Lohaphaisan, who were able to reach 100 career match wins.

“It was great,” Lu said. “Both of us coming in the beginning of freshman year and getting that achievement.”

Miller followed that up by showing how proud she was of her two juniors being able to step up in leadership roles having no seniors on the team.

“They’ve been on a team that’s winning and they still have the fight to win,” Miller said. “100 matches is always a milestone here and hitting it your junior year is an even bigger achievement. They’re going to continue to build on it and continue to go high on that all-time win list.”

Another highlight for the Bobcats was freshman Dominique Vasile. Vasile was down 7-5 in her first set, only to come back to win 6-1 in each of the next two. She has now improve her overall match record to 16-5. 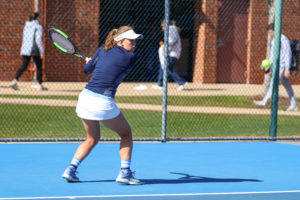 [/media-credit]“Honestly, I just tried to forget about the first set because it’s two out of three for a reason,” Vasile said. “I just tried to work on my game, do what I could and I guess it worked out in the end.”

Besides the on field production, the freshman from Michigan has been able to catch her coaches by storm with her quick adjustments to the college level.

“She’s tough on court,” Miller said. “She has the fight and doesn’t want to lose, and I’ve been impressed because you always worry about freshman and if they’re going to crumble and have nerves during that first year and she’s just been solid.”

With the regular season complete, the Bobcats look ahead to the conference tournament where Miller expects her team to compete at a winning level.

“The competition, even though we’ve done pretty well score wise has been pushing us,” Miller said. “They have nothing to lose and everyone’s goal is to come out and beat us. I told them that they have to be prepared for every match out their because we’re a target and someone wants to break our win streak.”