Serving up some good 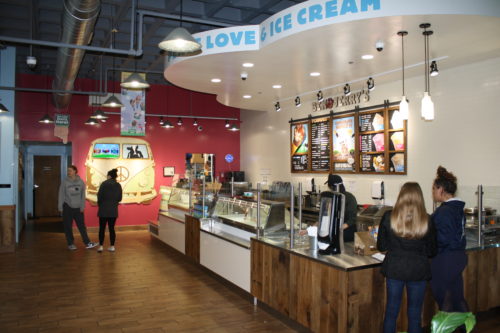 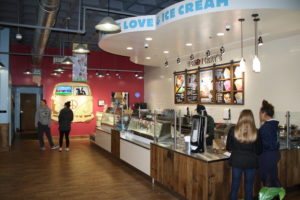 [/media-credit]If there’s ever been a surefire way to get attention for an event, it probably has something to do with ice cream or charity. Combine the two, and people are guaranteed to be interested.

Such was the case at Ben and Jerry’s in New Haven last Tuesday, where the local creamery handed out free ice cream cones in support of The Greater New Haven United Way.

Holly Lajoie, who co-owns the Temple Street Ben and Jerry’s with her husband Dan, explains that free cone day is a company-wide tradition, and is a way for store owners to give back to their communities.

“There are no sales on free cone day, it’s just come get your ice cream and have fun,” Lajoie said. “The thought is, instead of people paying for ice cream, they donate to the charity.”

One Quinnipiac junior, Meagan McConlogue, says that the event was a great way to bring together the local community.

“It was nice to see all kinds of people enjoying the same thing,” the econometrics major commented. “Everyone was smiling and enjoying being together.”

This year, Lajoie and her crew used a couple of new tactics to increase donation rates. An express line was offered to customers who wished to donate, and staff members were not shy about asking for a small offering.

While they may seem like minor details, these tactics proved successful, helping the local franchise to raise over $4,000 for The Greater New Haven United Way.

This is a stark improvement to last year’s numbers, which didn’t quite reach $1,000 in donations.

The United Way is a non-profit organization with local branches across the nation. It is the largest non-profit in terms of total donation and helps communities to fight all sorts of social issues, according to The Economist.

For Greater New Haven, those social issues generally take the form of homelessness and drug addiction, things that Lajoie, a Wallingford resident, witnesses on a daily basis.

“The first 20 people who walked through the door were homeless,” Lajoie said. “We had a lot of homeless who were here enjoying an ice cream. They got to have a treat that they normally wouldn’t be able to afford.”

Unfortunately, Tuesday wasn’t the only day people got their hands on free ice cream from Ben and Jerry’s.

“One homeless man did steal a pint out of the freezer,” Lajoie said. “I deal with that all the time. They’ll come in and try to distract people behind the counter and then steal something. It’s tough. It’s a huge problem.”

Lajoie says the issues of homelessness and addiction are so visible that she’s had to go so far as to call the police to remove an unconscious man from blocking the entrance to her store.

“Ben and Jerry’s says choose a charity- whatever’s close to your heart,” Lajoie said. “And I said, the first thing I notice here is the homeless and the hungry. This is the most visible for us at the store.”

McConlogue agrees that New Haven’s social issues are one of the first things she noticed upon arriving to the area from her native Long Island.

“It’s so sad to see, because it’s everywhere,” McConlogue said. “ Whenever I’m in New Haven, I always notice people panhandling or looking like they have nowhere to go. It’s not hard to find.”

New Haven is home to several methadone clinics, which serve not only locals but residents of neighboring cities.

While these methadone clinics are certainly an important part of the fight against the opioid epidemic, they do impose certain challenges for local business owners such as Lajoie.

But thanks to last Tuesday’s free cone day, the United Way is $4,000 more equipped to fight these ongoing issues New Haven faces.

Free cone day started in 1979 at the first Ben and Jerry’s, located in Burlington, VT. The owners wanted a way to thank their loyal customers, and has since blossomed to its current form involving different charitable causes.