Playing by her own rules 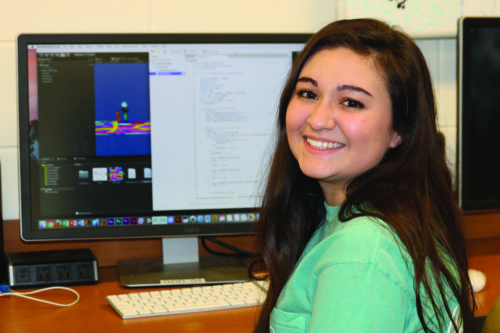 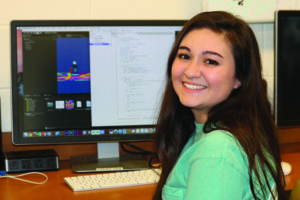 [/media-credit]As kids, we played “CandyLand” with our families around the kitchen table. As we grew up, we began spending afternoons after school in our friend’s living rooms, eyes glued to the televisions screens, completely enthralled by a round of “Mario Kart” only to go home begging our parents for the newest gaming system. Today, games like “FIFA” and “Fortnite” have taken college campuses by storm. Whether you consider yourself an avid gamer or haven’t sat down to play anything since your last disastrous round of “Monopoly,” the significant role gaming plays in our everyday life is undeniable.

This role has been especially meaningful in the life of sophomore game design and development major Katie Rosell. Like many, her interest in games was piqued in childhood. As the years progressed however, Rosell’s interest rapidly evolved into a passion; one that she’s now pursuing as a career.

“It’s something I’ve loved for a really long time,” Rosell said. “I’ve always loved playing video games and board games with my sisters when we were younger. I’ve found it’s an awesome way to bond with people too.”

Rosell has always been driven. Since she was a freshman in high school she knew that she wanted to pursue a major in game design in college. Due to it being a relatively young industry, the curriculum at Rosell’s high school in her hometown of Pelham, New York did not provide her with the opportunity to develop her abilities. She didn’t let this obstacle inhibit her growth as a game designer, however. Throughout her high school career, Rosell took advantage of every chance she could to put her passion into practice.

During high school, Rosell made it a point to intertwine her pursuit of game design with her other hobbies. For example, during her senior year she created an educational game about fire safety as she pursued the Girl Scout’s prestigious Gold Award.

She didn’t stop there. Prior to her arrival to Quinnipiac, Rosell traveled across the Northeast to partake in summer programs designed to let her put her skills to the test every day. These programs let Rosell utilize her creative abilities in ways that her high school wasn’t equipped for.

“When I was 14 I went to a summer camp at Bentley University that was all about focusing on game design,” Rosell said. The next two summers I went to other, really similar camps at Marist College and Purchase College in New York.”

It was here that Rosell learned the basics of game design. At Bentley University she was exposed to a variety of different game engines and first began to develop her own games.

“I’m really not sure how many games I’ve designed,” Rosell said. A lot of the games I’ve built aren’t fully fleshed out just yet, there’s always space for improvement. I’d guess though that I have maybe five or six that are fully finished.”

Although she remembers these summers fondly, Rosell also recalls that it was during these programs that she became acutely aware of just how male-dominated her chosen field of study is.

“When I was at Bentley, there were 37 other kids there, and I was the only girl. Not only that but I was also 14 that summer, and all of those guys were 17 or 18,” Rosell said. “They were all getting ready to go to college and I’d just barely finished my freshman year of high school.”

Being significantly younger than her fellow camp participants, coupled with the fact that she was the only girl, was sometimes an isolating experience for Rosell.

“I definitely felt pushed to the side some of the time there. People didn’t always want to hear me because they felt I was less experienced, and being the only girl made it hard for me relate with the other kids there. Still, I’m glad I did it.” Rosell said.

Her experience at Bentley was not a unique one. Being interested in game design has, on numerous occasions, led Rosell to find herself to be the only girl in the room.

Although the video game industry has been experiencing rapid growth in recent years, the workforce has continued to be predominately male. A 2014 survey conducted by International Game Developers Association (IGDA) found that of the 3,000 video game industry professionals polled, only 22 percent identified as female. When the industry was further divided by job description, the IGDA reported that Rosell’s area of interest, design, is completely male-dominated. A staggering 90 percent of survey participants within the field of game design identified as male.

Quinnipiac’s game design and development program is no exception to this trend of gender disparity. The already small program has just a handful of female students, Rosell among them. Unlike her experiences during earlier game design programs however, Rosell has never felt marginalized at Quinnipiac due to her gender.

“It’s a small program, so it’s a very tight-knit community. I see a lot of the same people in all of my classes and I’m good friends with a lot of the guys and the girls in my program,” Rosell said.

The game design and development program at Quinnipiac is comprised mostly of labs, and the major emphasizes the importance of team work. Students begin in their freshman year by working independently on smaller projects and developing their skills. Upperclassmen spend the majority of their time working collaboratively in groups, creating larger-scale, more complex games. Her time management skills are constantly being put to the test, Rosell noted, as some of her most elaborate projects have taken weeks to bring to fruition.

“It’s nice that everyone in the program is so close, it makes it easy to bounce ideas off each other in group work. You also get to learn what you’re best at, what you specialize in, like for me I’m more into the artistic side as opposed to the analytical.” Rosell said.

While Rosell admits that her love for game design is rooted in creativity, she notes that this preference pushes her to learn more about other facets of her major.

“I’ve always loved developing characters and drawing, so my program really tests my problem solving skills while still letting me use my artistic skills and combining them all into a study,” she said.

Although it hasn’t always been easy being the only girl in the classroom, Rosell says she simply can’t envision herself following any other career path.

“I knew before I even started applying to schools that I wanted to come to Quinnipiac,” Rosell said. “I wanted a school within two or three hours of home with a program specifically for game design, and Quinnipiac was the only one. I didn’t really consider other schools because they didn’t have this program.”

Since arriving to Quinnipiac in the Fall of 2016, Rosell has been involved in student life outside of her program as well. Rosell is an enthusiastic member of Quinnipiac’s Eta Pi chapter of the Gamma Phi Beta sorority. Since rushing in the fall of her freshman year, Rosell has routinely taken an active role in her sorority’s social and philanthropic events.

Rosell encourages any girl with an interest in game design and development, or any similar field, not to hesitate in pursuing it just because it’s a traditionally masculine industry. Just as the industry continues to grow rapidly, Rosell predicts that soon the number of female game designers and engineers will multiply as well.

“My advice for any girl that’s interested in game design is to just go for it,” Rosell said. “The key is really just to have confidence in yourself and to do what you want to do. You’re the only one standing in your way.”