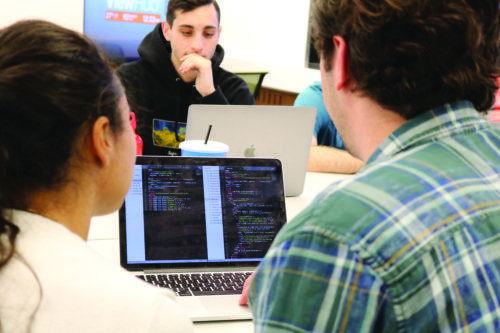 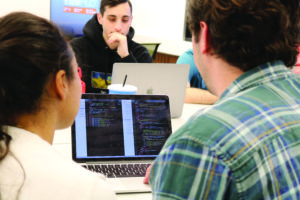 [/media-credit]On May 2, a semester’s worth of work will come to fruition. The students of CIS490, the computer information systems (CIS) capstone, will present their semester projects to a panel of judges, which include professors and the clients that they have been working for.

Associate Professor of computer information systems Kiku Jones, who teaches the course, said there are four projects that the class worked on this semester.

“Preventable” is a project that would let people track where instances of violence are occuring with the hope of preventing future problems.

“Health Now” is a database of currently uncured diseases, with information and research about them. The others are for the Center for Women in Business, and the School of Business’ mentorship program.

For this showcase, Jones is looking forward to how the clients will respond to having more than one team work on each of their projects.

“I’m excited for the clients, because they actually get to see more than one team that selected their projects, and they can take a look at the different options,” she said.

The work starts with obtaining clients. Jones focuses on non-profit clients, as it falls in line with the CIS major’s idea of “I.T. for Good,” which means that the students “get to use their skills and ability in a positive way.”

Next is getting the projects started. Max Goldfarb, a senior CIS major and a current student in the class, said that the students choose what topic they’d like to work on. Jones hides the identity of the client requesting the project, so the students can make their decisions without biases.

Projects may be rejected by virtue of not having enough students supporting them. Even though this class’ bunch ended up being projects inside QU, other areas off the community may get involved as well.

After that, the roles of the students in the project is determined. Goldfarb, who is currently a project manager for two of the projects, said that nearly everyone in the class applies for that role. For those who don’t make it into that position, other tasks on the team are determined, like team leaders, analysts and developers.

In order to have the development process be organized, Goldfarb said that the project was broken down into milestones, based on accomplishments, like finishing the user side of the website. Even after they hit their milestones, they will keep working until they create a prototype (or as they call it, a minimum viable product).

During the night of the showcase, there will be two featured projects. Jones says that the two teams chosen will be able to go up on stage and present their work. As well, judges will be there to commentate on the student work. These judges can be the clients themselves, CIS professors and people from various companies like Deloitte,a consulting firm, and The Hartford, an insurance company. During the evening, the students will also be given time to engage in networking.

However, Goldfarb thinks that the most important part of the evening is having the group projects approved by the client, so they might negotiate terms for continuing work.

Edward Brady, a senior entrepreneurship major, is a fan of the capstone program at QU, as it is beneficial for students when they get into the real world.

“What the CIS majors are doing right now is great; being able to work for a company, and build a software for them and potentially put it on their resume is huge, especially in today’s day and age,” he said.

When asked about past capstones, one project stuck out in Jones’ mind. Last year, students were asked to design a registration site for Leah’s Dragonfly Run. The event raises money for the Leah Rondon fund, which was started in the memory of the child it was named after. Jones knew Rondon, so she thought it was “a big one.” The organization liked the work that the students from CIS 490 did. The project created by that class is expected to go live soon.

Goldfarb felt that the class was a good way to sum up all of his experiences in the CIS major, before having to go into the real world.

“Before CIS 490, I wasn’t sure how I’d be combining all the different skills. I needed to pick a direction of what I wanted to do… the CIS 490 project is doing an amazing job of helping me all ign the vocational goals, along with jogging my memory of skills that I learned at the beginning of my educational career,” he said.

When asked what a student joining the class should be prepared for, Jones says that there will be a lot of work, but it will be worth it because the students will want to give it their all.

“It’s about getting that last semester to hone in on those skills, and tighten them up before you walk across that stage and graduate,” she said.