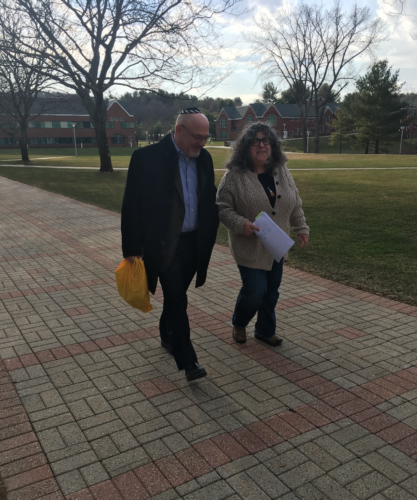 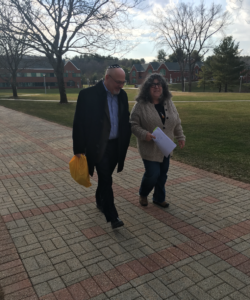 This is the first year that the Hereld House has hosted a second generation Holocaust survivor rather than a first generation.

“We’ve had three, but this was the first time with the twist being that it was not a first survivor,” Rabbi Reena Judd said. “It wasn’t someone who survived Auschwitz and the camps.”

Judd was advised to contact Berkowitz through the Anti-Defamation League (ADL) in Hamden. The ADL advocacy and programs focus on anti-Semitism and all forms of bigotry, extremism, hate crimes, civil rights, interfaith and inter-group understanding and peace in the Middle East, according to its website.

On Holocaust Memorial Day, communities and universities throughout the world do programs to commemorate the war as best they can, according to Judd.

When Judd received word of the program that Berkowitz was involved in, she deemed it thought provoking enough to reach out to him in particular to invite to campus.

“He was the next generation sharing a different story,” Judd said.

While Berkowitz is the son of two survivors, he does not consider himself the child of Holocaust survivors.

“My father was never in a death camp,” Berkowitz said. “My father in-law was in Auschwitz, he has the tattoo on his arm to prove it, but my family didn’t talk about it at all. My dad died when I was 10, but all our friends were generally survivors.”

The event aimed to commemorate the Holocaust and to remember the six million who suffered along with the millions who were victimized.

“When we talk about the Holocaust we can never forget the unique nature of the Jewish experience,” Berkowitz said. “In that six million were purposely, intentionally murdered for no other reason except what their faith was and how that was somehow wrapped up in Nazi racists and redemptive ideology.”

On Nov. 9-10 in 1938, the German Nazi’s attacked Jewish persons and their property on what is now known as the Night of Broken Glass, Kristallnacht.

The pogroms, or organized massacres, continued through the day on Nov. 10, 1938 with acts of violence following for several days.

“On Nov. 9 and 10, shops were vandalized, people were murdered and synagogues throughout the country were burnt to the ground,” Berkowitz said.

The discussion then moved to the history of the word Holocaust and the impact it has now. Berkowitz explained how the word Holocaust comes from the Greek word holokauston, translating from Hebrew to mean “completely burnt offering to God.”

“When we’re talking about it, it’s really hard to make sure that we’re honoring the victims and not minimizing the experiences of others,” Berkowitz said.

Judd and Berkowitz then led the students and faculty in a walk from the Peter C. Hereld House to the Complex Courtyard.

“During the walk it should be silent so when people ask you what you’re doing we’ll have these little pamphlets to hand out,” Caleb Shulman, AEPi president, said.

The discussion that Berkowitz held impacted both the faculty and students that were present, according to Judd.

“There were more faculty than I had expected,” Judd said. “It impacted, in my opinion, the faculty differently than it impacted the bulk of the students. It was interesting to watch, they were caring and they were very much present.”