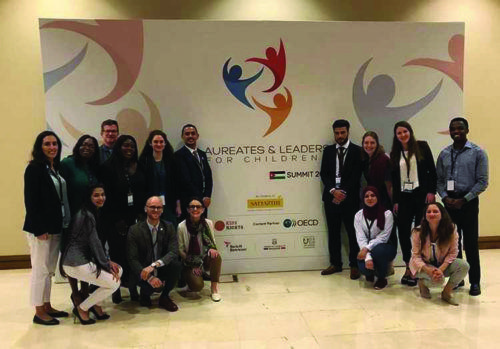 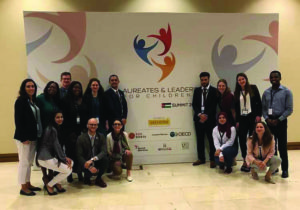 Leah Mantei, Layomi Akinnifesi, Franklin Ramsay, Velvet Chestnut, Margaret Crampton and Layla Hindiyeh were the six students who were able to attend the summit where they learned about the effects of the refugee crisis on children who have been displaced because of civil unrest. Professor of political science and Head of the Albert Schweitzer Institute, Sean Duffy, attended as well.

“I know that, from my perspective, the goal of the (ASI)  is to provide all sorts of opportunities for students to explore the areas of focus that the ASI emphasizes: Peace and Human Rights, Health Care for Human Development, and Ecological Stewardship,” Duffy said.

The Institute is responsible for facilitating programs within the United States and internationally to connect education, ethics and volunteerism to give students a global perspective on certain issues.

“I have been to several conferences within the past three years, but this is the first time that I came back home feeling a sense of anger,” freshman health science studies major, Hindiyeh said. “Not because the summit was poorly run, or not what I expected, but for the first time I was irritated that I was returning to a home where I can learn and voice my opinions when so many people cannot.”

The summit was held in Jordan because of the country’s willingness to accept refugees, especially children, from various countries. Many of the children are forced to be on the move and are stripped of many of their basic freedoms as a result. The Laureates and Leaders for Children Summit emphasized these issues.

The event was spread over the course of two days.

The first day of the conference consisted of round table discussions. Each table had about eight people, consisting of students and world leaders.

Day two consisted of break-out sessions where students were able to engage in interactive discussions where people shared a personal experience in which they dealt with a vulnerable child, and its impact.

“I learned that youth all around the world are incredibly engaged, well-spoken and inspiring,” Mantei, a second year student of Quinnipiac School of Law, said. “They are capable of bringing about the change that this world needs. However, at the same time, I learned that sitting in circles and talking about issues is not going to solve them. I am glad that they started having a conference that focuses on issues specifically facing children, but what I also learned, with that in mind, is that we have so much more to learn to really build programs that are geared towards improving childhoods and helping children.”

At the conference, students learned that as of 2016, more than 28 million children live in a situation of forced displacement. An additional seven million are internally displaced due to poverty, conflict, war or natural disaster.

The purpose of the event was to bring awareness to all individuals from around the world that something needs to be done and improved upon for future generations. This was done to emphasize that every single child in the world matters, regardless of where they live or the current situation they are in.

“Why was I given this life when millions of children are placed in conflict and on the move, suffering from physical and mental abuse?” Hindiyeh asked herself. “I came home from the conference and quickly resumed my daily routine: studying, playing with the band, exercising, and other things that I consider normal. What I know now is that millions of kids are only hoping for food and shelter, not a quiet environment to study for their next exam.”

In a survey conducted regarding Syrian children who were refugees, over 60 percent of them had either lost a family member, been displaced due to house bombings or suffered war related injuries.

“I think my biggest takeaway is that there’s still a lot to be explored when it comes to having solutions like the refugee crisis and children without education,” Franklin Ramsey, a junior  computer informations systems major who attended, said. “Personally, I learned to approach problem-solving in the way that you want to solve things looking at the big picture.”

This summit allowed for those present to see and hear the reality of these children’s lives in order to hopefully make steps towards peace and promise for these young individuals. It is an opportunity that not many people are given.

Duffy hopes that students gain a better sense of the connection between local and begin to find a way to connect thinking about things like human rights and acting on them.

“Albert Schweitzer is best known for his ethics of A Reverence for Life – the belief that all life is sacred, and that we should act always to promote, preserve, and protect life – and his hope that his life would be his argument,” Duffy said. “In other words, that he would demonstrate his values by the way he lived his life. ASI trips and programs are presented with the hope that students and others who participate begin to find their own way to live a life of meaning, true to their values.”