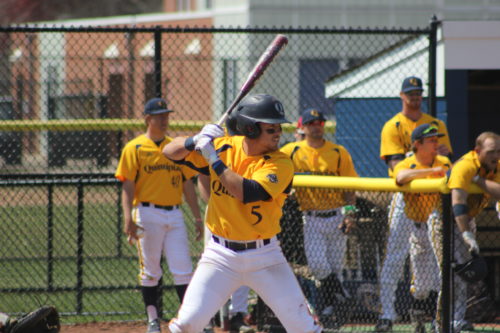 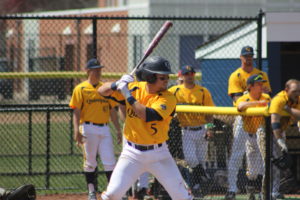 [/media-credit]Becoming the starting third baseman on a Division I baseball team, earning all-state honors and managing course work as an athletic training major can be a lot, but it’s just life for Quinnipiac sophomore third baseman Evan Vulgamore.

Vulgamore, a native of Bow, New Hampshire, flourished at the high school level. During his senior year, he had a .646 batting average (BA) and hit five home runs (HR). He also earned all-state honors for all four years. This was enough for Quinnipiac head coach John Delaney to take notice.

“His energy stands out, his leadership skills and seeing the way he acts on the field,” Delaney said. “He’s very vocal and that’s what we look for when recruiting and for Vulgamore that’s the number one thing that stood out to us. His talent is above average among most kids, but the other part [leadership] is what makes him an above average college baseball player.”

Choosing the right college can be tough for anybody. Luckily for Vulgamore, he felt an instant connection to Quinnipiac when going through the recruitment process and Delaney was a big part of that.

“[Quinnipiac] originally saw me play at an area code tryout,” Vulgamore said. “Right off the bat I fell in love with the campus and the coaches. Coach Delaney made me feel a part of the family and that’s the atmosphere you look for when you’re trying to play in college athletics. He made me feel I was going to fit in right away and I did.”

Vulgamore is also dedicated to what he is doing off the field. He is an athletic training major and it can be tough to manage practice and game times with the course, but for Vulgamore it is a skill he feels is necessary to learn.

“I just have to get my work done when I’m assigned it,” Vulgamore said. “I have to balance everything equally and keep up on my studies.”

Vulgamore had a tough start to his Quinnipiac career during his freshman year. He had a .172 BA, only producing eight hits and 15 RBIs while hitting just one HR. He played in 31 games and made 23 starts.

Vulgamore was not alone, as he had help along the way not just from Delaney, but from some of his teammates, including senior first baseman Ben Gibson and graduate student relief pitcher Wyatt Hamilton.

“He has done a lot of the learning himself,” Gibson said. “He came in here as a guy who wasn’t afraid of that college atmosphere. He showed that he was able play ball at the college level with all of us and it’s been awesome to watch.”

Vulgamore also credits the mentorship he’s gotten when things don’t go his way on the field.

“If I’m ever down, [Hamilton’s] the kid I always go too,” Vulgamore said. “[He] keeps me level-headed, puts things into perspective, always keeps things positive and really keeps me loose and is one of the funniest kids I’ve ever met.”

Vulgamore has turned it around during his sophomore year. He currently has a .288 BA with 36 hits, seven doubles, six HR and 24 RBIs in 36 games.

“I definitely learned how to fail,” Vulgamore said. “I didn’t have the freshman year everyone thought I would and now if I have a bad game I don’t let it get to me because I know I have another game the next day.

What makes a college baseball player stand out is being able to play at the same level defensively and offensively. Being better at one only creates a disadvantage for the player. Versatility is as important as ever showing coaches that a player can field multiple positions at a high level. With Vulgamore having to move from blocking balls behind the plate as a catcher, to fielding ground balls at the hot corner known as third base, Delaney mentioned how he feels the process is going.

“Experience,” Delaney said. “He had Tommy John surgery his senior year of high school and when he got here he was still rehabbing. The fall season is a big point for freshman to develop and he didn’t have the chance to develop. Experience is the biggest thing and he had a summer to develop plus this past fall and now you see his production.” 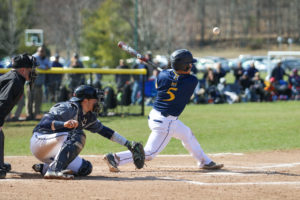 [/media-credit]Tommy John surgery is necessary when an elbow suffers a tear, so players have surgery to replace it with a tendon or another ligament from a donor. For a baseball player, it affects their throwing because they aren’t able to throw with the same mechanics as before and you either come back throwing faster, slower or the same as before.

Training isn’t the only thing that Vulgamore credits towards his improvements. That family atmosphere is something that is keeping Vulgamore working harder and harder each time he takes the field or steps up to the plate.

“All of the upper class guys and the coaches and staff have really helped me,” Vulgamore said. “When I’m down, I know that there is somebody to pick me up or a pitcher telling me I’m going to pick you up on the next play. My teammates and coaches I give credit to for always having my back in those situations.”

For the Bobcats, they are currently 16-18 overall and 8-1 in MAAC play, their best start under Delaney, who was been at Quinnipiac for four years. Vulgamore sees that this team has the potential to go a long way and he’s glad that he’s able to contribute to it.

“For us it’s MAAC championship or bust,” Vulgamore said. “We have the it factor that we’re looking for and we want it all year. Also, we love the support because we don’t get a lot of it and we recognize that and feed off of it.”