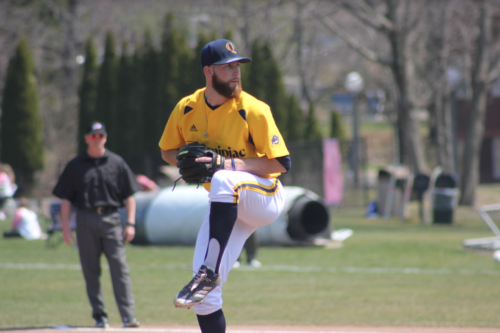 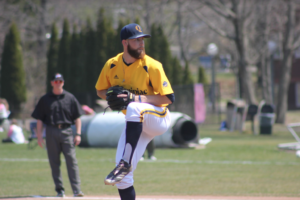 Although the Bobcats got the series win, Quinnipiac head coach John Delaney wanted to keep the momentum going by winning both games.

“Game three is the toughest game of a series,” Delaney said. “Winning a series is what you plan to do, but in order to sweep you have to rely on your talent to perform big.”

In game one, sophomore third baseman Evan Vulgamore was a big offensive catalyst for the Bobcats. Vulgamore had two RBI’s and went 1-for-3 at the plate.

“The past couple games I’ve been struggling at the plate and my swing has gotten very long,” Vulgamore said. “Today [Saturday] I was just trying to slow it down, find pitches I could hit and drive and I found a couple.”

A big contributor on the defensive side was graduate student pitcher Brandon Shileikis. Shileikis went seven innings, giving up two earned runs on nine hits and striking out five. Shileikis now improved his record to 4-3 with a 3.36 earned run average.

“I was able pitch well by staying in the zone and the guys behind me were making great plays,” Shileikis said. “Overall, it was a great team effort.”

Game two was a different story for the Bobcats. They sent out junior pitcher Tyler Poulin who has the third lowest earned run average on the team with 3.02. However, Poulin struggled, going four innings, walking six batters, giving up three runs on three hits and striking out five.

Delaney appreciates how Poulin competed, but expects him to pitch at a much higher level in the future.

“Poulin didn’t give us his best outing, it was probably his worst of the year,” Delaney said. “He didn’t throw enough strikes and had some situations which they were productive in and it cracked the game open.”

A positive aspect the Bobcats can take from this series is overall defensive play. In the first game, they only made two errors and in the second game they made just one.

Delaney sees the improvement and wants the Bobcats to play that same defense on a consistent basis.

“Defense since we’ve been home and in conference play has been a lot better,” Delaney said. “A lot of that has to do with limited time on the field and up until two weeks was when we started to play games. It’s going to take time when you look at our team because they’re not a lot of older guys out on the field, mostly freshman and sophomores.”

The Bobcats will look carry the play they’ve displayed this weekend when they go on the road against Bryant on Tuesday, April 17 at 3 p.m.