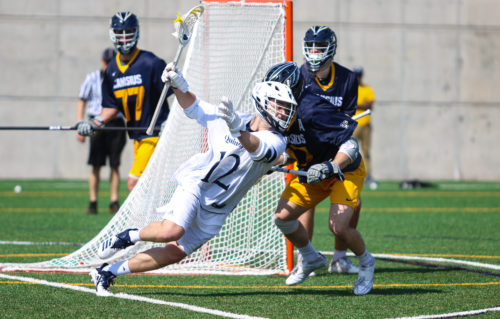 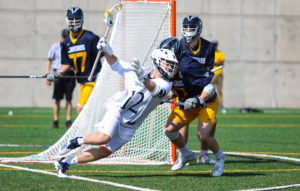 [/media-credit]On what may be the nicest Saturday of the year so far in terms of weather, the Quinnipiac men’s lacrosse team defeated Canisius 19-14 in a Metro Atlantic Athletic Conference (MAAC) clash on its Senior Day.

“I thought it was a good game, I thought we played really well,” Quinnipiac head coach Eric Fekete said. “I thought other than the last five minutes, as I said to the guys ‘it’s a really great movie until the last 20 minutes’ and then it kind of has an anticlimactic ending, but going 4-0 in the conference is what we wanted. I believe mathematically we clinched a spot in the playoffs today and that’s really what this is all about.”

The Bobcats (7-5, 4-0 MAAC) were caught in a back and forth tilt until they went on a 6-0 run in the second quarter. The run saw multiple goals from freshman attack Jake Tomsik and senior midfielder Ryan Corcoran.

The Bobcats used 18 substitutes compared to the Golden Griffins (5-7, 2-2 MAAC) who used 11. The Bobcats’ subs helped to win the ground ball battle which is a key to winning games, according to Fekete.

A key to giving the energy and jump to the subs comes from the Bobcats top line of Tomsik, junior attack Foster Cuomo and junior attack Mike Fletcher. The trio combined for 11 goals and 15 points on the afternoon.

“Cuomo, Tomsik and Fletcher, those guys continue to produce,” Fekete said. “There’s a harmony with all three of them, they love playing together. We talked last week about how sometimes one of them can go off and it seemed like all three had big days today. I’m fortunate to have those guys, they’re all up in the mid thirties in points, they make a big difference for us.”

The Golden Griffins also had their top players play as such. Sophomore attack Mathieu Boissonneault, senior attack Connor Kearnan and senior midfielder Steven Coss combined for eight goals and 14 points on the day.

Things got interesting in the fourth quarter as Canisius caught fire, rifling off seven goals to Quinnipiac’s four, but the Bobcats managed to hold on.

“I think we just let off the gas a little bit,” senior defenseman Riley Palmer said. “We got a little complacent towards the end looking at the score, it’s happened before and hopefully it won’t happen again, we’ll fix it this week.” 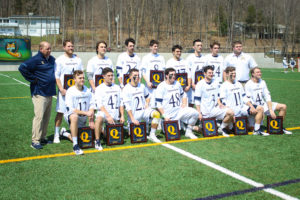 [/media-credit]The Bobcats are losing 14 seniors to graduation at the conclusion of the season, which is something that helped motivate the team to win, resulting in the team scoring a new season-high in goals. The goal total of 19 surpassed that from earlier in the season when they defeated the New Jersey Institute of Technology 18-6.

“I mean there’s definitely a couple factors,” senior long stick midfielder Adam Bellamy said. “It’s sunny and 70 out right now, senior day, so we brought a lot of energy for that. A lot of emotions, we have a huge senior class so we just got the boys going.”

This senior class has accomplished a lot in their time at Quinnipiac, including winning a MAAC Championship back in 2016.

“It’s hard to see anyone go,” Fekete said. “Usually my wife gets more emotional than I do and I remind her that if I’m doing my job, they should be gone in four years. If you look at the sample of work over the four years, they have a pretty strong resume moving in to where they are today.”

The Bobcats look ahead to another MAAC matchup at Monmouth on Saturday, April 14.

“It’s going to be easy to get up for these guys for sure,” Palmer said. “We’ve had a rivalry ever since we’ve been here, it’s just been great games with them and we’ll be ready to play.”