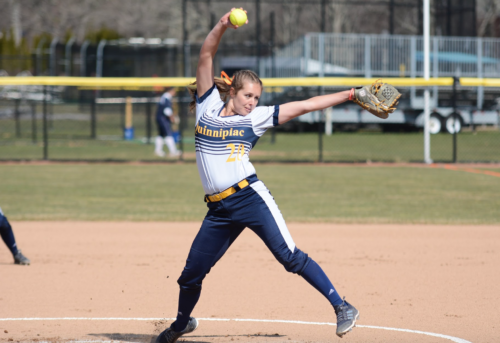 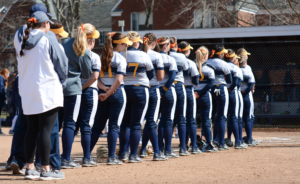 [/media-credit]The Quinnipiac softball squad lost to Yale on Wednesday 8-0 in five innings, but there was more to the day than just a loss shortened by mercy rules.

It was “Chris’ Game,” which occurs when the Bobcats (16-18) play the Bulldogs (8-22). The game is dedicated to the memory of Quinnipiac assistant coaches Rocco and Lynn Labbadia’s son who past away as a result of a car accident in 2016 at just 19 years old.

Chris was driving to a neighboring town to give a friend their wallet back, which they had left behind. The two teams came together before the game to hear some announcements and for a ceremony celebrating Chris. At the time of his passing, his sister, Brittney, was a member of the Bulldogs softball team.

“I told them we all have life changing events in our lives, as much as we wish that isn’t going to happen to any of us, it’s going to happen to all of us at some point,” Rocco Labbadia said. “What I told them, is they have to learn from today. They have to know that life gets in the way a lot of times, but when you step across, in this field on the white lines or across these orange lines, it’s game ready. Game on.”

The game didn’t progress in favor of the Bobcats as they were unable to get their bats going throughout the afternoon. The team only mustered two baserunners on two hits and no walks.

The Bulldogs were all over Bobcats’ starter sophomore Abbey Long, going off for seven hits and eight runs, five of them earned. Long also finished with fives and only one strikeout.

Three Bulldogs tallied multi-hit games on the day and one had multiple RBIs. Junior catcher Madison Sack finished her day with two hits and two RBIs in three trips to the plate, while having three put-outs and one assist in the field. They were aided by the Bobcats’ three errors in the field.

“Let’s be honest about it, we have to be a little more patient at the plate when the time is to be patient, we need to be aggressive when the time is aggressive,” Rocco Labbadia said. “Every pitch is a learning experience, every at bat is a learning experience so if they learn from today they’ll learn to understand what it’s like to hit a changeup, lay off a rise ball and be aggressive when they need to be.”

A surprise came when senior pitcher Casey Herzog, the Bobcats’ No. 1 option to take the mound, didn’t get the start today. 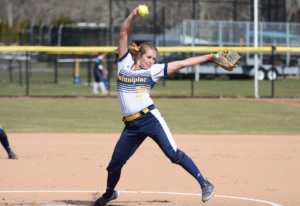 [/media-credit]“I think it’s just a matter of trying to get some time in for these guys,” Labbadia said. “They all have to be ready come MAAC time, Casey’s been doing what she needs to do on the weekends and the others are coming along all for the positive. I thought Abbey made a lot of great pitches today, got a lot of ground balls like we expected out of her, you need to make the plays.”

The Bobcats are looking ahead to a busy weekend traveling to Marist on Saturday before heading back to Hamden for a double header with Iona on Sunday. While they will be looking forward, it’s not always a bad thing to take a look back.

“Love it, hope it happens for a long, long time even after I’m gone, hopefully I won’t be gone for a long time,” Labbadia said with a laugh. “For real I think it’s great, like I said early on it’s a rekindled experience and for all the right reasons.”