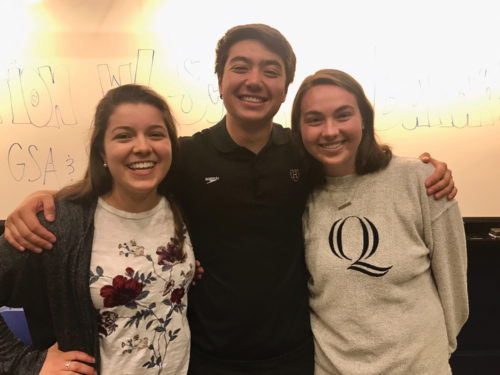 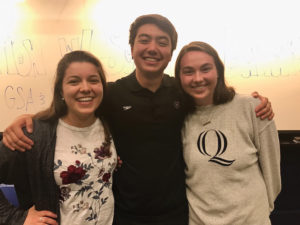 The Echlin Center was filled with people wanting to hear Bailar’s story of coming to peace with being transgender and how that defines how he lives today.

GSA opened up the event by introducing Bailar and giving a brief background of his life. He graduated from Georgetown Day School in 2014 and is currently attending Harvard University on a swimming scholarship.

The purpose of the event was to have the topic of being transgender explained by someone who college students can relate to, since he is a college student experiencing much of the same emotions and issues as everyone else.

“I think that Quinnipiac is very sheltered from diversity because let’s be honest most of the students are white and heterosexual, so this event is extremely important for people to know the struggles and what life is like as a transgender,” Jack Dickinson, a sophomore film major, said.

GSA is planning to host more events similar to this so students can be more aware and understand what it means to be transgender or a part of the LGBTQ community.

“I think the benefit of having speakers like Schuyler come is having people become more culturally aware and more socially competent,” Shelby Petrie, Vice President of GSA, said. “A lot of the time people don’t take the time to learn about things that don’t immediately pertain to themselves. Having people become more educated on things that they don’t really know about is good for society in general.”

Bailar began by telling everyone in attendance about his life from his birth to today. He particularly focused on his love for swimming from the mere age of one.

“I’ve been a water baby my entire life,” Bailar emphasized. “It has been the most comfortable place for me that I’ve ever had.”

He was biologically born a female but has since transitioned and identifies himself as a male. As a result, Bailar focused most of the event on a question and answer session with the audience. He wanted those who attended to feel comfortable to ask questions in order to provide more insight on the topic of being transgender, which many people may not know much about.

“When I got to high school a lot of things for me changed,” he explained. “During my growing up years specifically in middle school, I just expressed myself the way I felt most comfortable. For all intents and purposes, I looked like a boy, but I was supposed to be a girl. So, I went through my life telling people I was a girl.”

Bailar went on to explain how throughout most of high school, he was miserable. But he could not understand why. Upon graduation, Bailar told his new coaches at Harvard that he needed to take a gap year to take care of his mental health.

He stayed at Oliver-Pyatt Center in Miami for five months.

“It was there that I was able to say to myself: I’m transgender,” he said.

He wanted to share this story with those in attendance in order to relate to everyone not just about being transgender, but about fitting in and accepting yourself for who you are. He then opened it up for the audience to ask questions. His goal was to make everyone in the audience comfortable to ask questions about what his transition meant for him.

Questions ranged across a various amount of topics such as the hardest person he had to come out to, familial acceptance, adjustments to acting like a man or the different feelings of wearing a men’s swimsuit versus a female suit.

Bailar wanted to be honest with everyone in the room and did not leave any questions unanswered. He answered each question that was either asked anonymously or in person.

“It’s one thing to be able to break barriers in a community by yourself, but to share it with others is really inspirational,” Alexzandra Bradley, a sophomore who attended the event, said. “It gives a bigger meaning then ‘doing it for yourself.’ Bailar’s decision to come to Quinnipiac not only puts a platform on acceptance and the strength of transgender people in the community but their hardships too.”

By sponsoring this event, GSA and SGA hope that this will serve as a sign of forward progress for the LGBTQ community. Schuyler Baliar’s story of acceptance has led him to appear on 60 Minutes and Ellen so that people would be aware of his story and encourage others to accept themselves.

“I think it will do this. The more we expose people to stories like Schuyler’s or people who have unique stories, the less taboo things like this will be in society,” Petrie said. “It can be uncomfortable to talk about, but it can be a catalyst for progress.”