Tumbling on the top 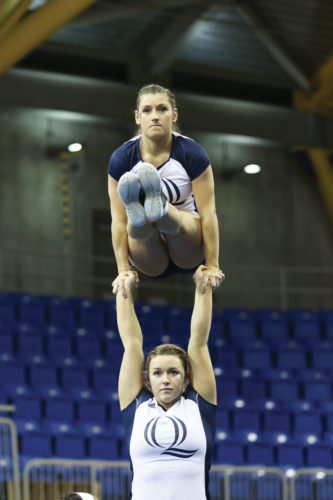 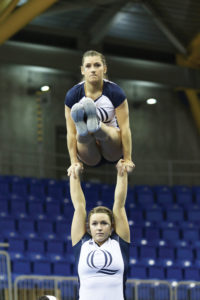 [/media-credit]Leadership comes in many shapes, sizes and backgrounds. For the Quinnipiac’s acrobatics and tumbling team, it comes from senior top and co-captain Abby Ziser.

Ziser is helping lead the Bobcats back to the National Collegiate Acrobatics and Tumbling Association (NCATA) National Championships with both solid play and the right attitude both on and off the mat.

Ziser is a four-year starter for the Bobcats and has claimed several awards in her time at Quinnipiac. Most recently, she won ECAC Acrobatics and Tumbling Athlete of the Week award for her role in the Bobcats’ first-ever win over the Oregon Ducks.

“Her growth has been steady, it’s not like she’s satisfied,” Quinnipiac head coach Mary Ann Powers said. “When you have somebody like that, who continuously climbs up a ladder, you just know they’re going to be successful in life. I remember saying to her father her very first year as a freshman, ‘Her maturity was there and so was her hunger,’ your daughter is going to be a rockstar in this sport.”

Ziser started her path to the acro mat when she was eight years old as a gymnast. After doing gymnastics for a little while, she took a break and picked up cheerleading. However, she soon realized that she couldn’t stay away from the mat.

“It was just the timing for me, but obviously I missed it a lot so I couldn’t stay away,” Ziser said. “I went back and I’m so glad that I did because I couldn’t imagine not doing acro.”

For Ziser, her path to Hamden started her senior year of high school when her coach at North Stars Gymnastics in Boonton, New Jersey recommended her to Powers. Right away, Powers knew she wanted to see Ziser as a Bobcat.

“She was strong, you have to be strong in order to tumble well, in order to do the things that we do aerially,” Powers said. “Her attitude was always about gaining new skills. You could just see the hunger from her, she always wanted to take on more, she’s been like that since she arrived.”

Another Bobcat who is showing a similar attitude and drive to learn new skills is sophomore top Melanie Mancini. While Mancini comes from more of a cheerleading background, she has still found success having been named NCATA Specialist of the Week after winning all five heats she was featured in against King University.

Being two years older and coming from a different background doesn’t hinder the influence that Ziser has on Mancini. As Ziser is a senior and graduating, her impact on Mancini is helping keep the future bright for the Bobcats.

“Everything I did I always strived to be like Abby, she was what I wanted to be,” Mancini said. “My technique when it came to acro, whether it was tumbling or actually acro itself, I really just strived to do everything she did.”

This was made easy for Mancini as Ziser led by example while on the mat even when it wasn’t gameday, according to Powers.

“For Abby, she is the epitome of leadership,” Powers said. “On the mat at practice she is always working, even if she’s not in something she’s off to the side working to get better. She just always goes for it.” 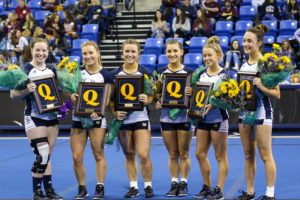 [/media-credit]But for a leader of any sort, especially a captain, there’s more to leading than just what you do on game day. People value athletes whose leadership qualities are present beyond the box score, according to Bleacher Report’s James Morisette’s.

“She’s so, so nice, she’s so caring,” Mancini said. “She’s the type of person that’ll do anything for anyone on our team. She’ll help us with schoolwork if we need it in a certain subject that she’s taking, or a certain class. I live in New Village and we’ve had a lot of power (outage) issues this semester and she’s offered for us to come stay at her house if we needed someplace to stay and shower and sleep.”

It was qualities like these that resulted in her teammates voting her as one of the four team captains going into this season. While the coaches had some input, this was mostly a result of her peers and the impact she has had on them.

“It felt great because when I was a freshman I was really, really quiet and I didn’t talk that much,” Ziser said. “Now being a captain it’s just a great feeling because it shows that all my hard work really paid off and that people notice that I work hard and they look up to me which is such a great feeling.”

Over her time as a Bobcat, the fan attendance has grown as well. The larger crowds helps to add to the excitement of the sport, according to Ziser.

“I love the fans’ attendance because that’s when they really bring the energy and excitement to the sport,” Ziser said. “I think it’s great to see everyone supporting you and cheering you on.”

The Bobcat faithful should have a lot to cheer for in the coming years, as it appears that Mancini is set to fill Ziser’s shoes after she graduates and moves on with her education, planning to go to chiropractic school. While they’re both unique individually, both Ziser and Mancini both have similar work ethics, according to Powers.

“That would be a really big compliment (to be compared to Ziser),” Mancini said. “The things Abby does are kind of amazing, so if I could be the one to come in and fill her shoes that would be such an honor for me.”