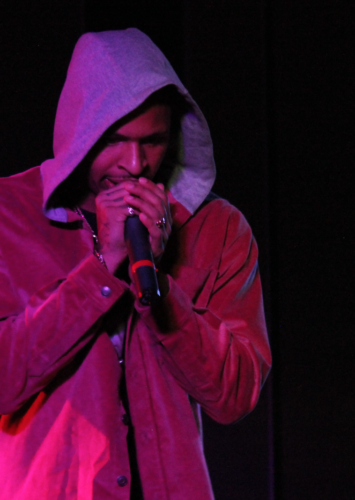 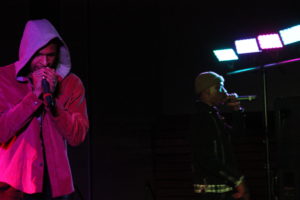 “We do two concerts and Spring Fest was supposed to be the bigger concert to bring in like names and kind of what we thought the school wanted to listen to,” WQAQ music manager, senior Christopher Brachlow said. “It was just another way that we could bring people in, to come to our school and bring in good artists and give them attention.”

In previous years, WQAQ had performers such as Balance and Composure, Superheaven, Pile, Alex G and Pine Grove perform at Spring Fest.

“Typically we used to do punk and we just switched to rap,” Brachlow said.

This year’s performers were The Underachievers, a hip-hop duo based out of Brooklyn. The duo consists of the two rappers, AK and Issa Gold, who were signed to the record label Brainfeeder by record producer Flying Lotus in 2012. Their debut album “Cellar Door: Terminus Ut Exordium,” which translates to “the border of the beginning,” was released in 2014.

The Underachievers are now on a world tour after the release of their latest album, “Renaissance,” in May 2017. Their newest album features songs such as “Eyes Wide Open,” “Saint Paul” and “In My Zone.”

The hip-hop duo has a dedicated following, as many of those in attendance at Spring Fest had traveled to see the band perform.

“I just like their vibe,” 21-year-old Naugatuck Valley Community College student Grant Johnson said. “I like a lot of the music that is coming out of the east coast and they’re part of that group, so you know that’s really cool.”

“I have been to pretty much every show of theirs since their first tour back in 2014,” Pitta said. “It’s not about their sound always, it’s more about the message they bring. The message of consciousness, spirituality, obtaining all your goals, being Godly. They’re amazing.”

Word of the band’s performance may have attracted their fans to come, but a few of those in attendance hadn’t heard of the band prior to the concert.

“I came because my friend wanted to come,” freshman accounting major Chris Cohen, said. “We looked up the guy and he was good so you know, like we’ll just come.” 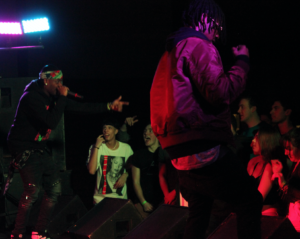 [/media-credit]Finance major Zachary Cyran had spent his day at the Big Event and decided to stay on campus and go to Spring Fest.

WQAQ started preparing for the annual concert about six months ahead of time. They spend their time working on promotions and contracts with the talent to make sure that the concert comes together as smoothly as possible.

“Leading up to it, we created an ad, which you can see around campus,” Brachlow said. “[We] post radio ads, go flyering, post it on Facebook groups that have fan bases on that type of music, promote the crap out of it and hope it goes well the day of.”

Quinnipiac students get in for free while visitors have to pay 10 dollars at the door. All the visitors who paid to attend the concert helped the WQAQ station make money. With 150 people in attendance, the concert earned $750 in sales.

“Overall we would say the show was a success. It was our first rap show in years. The music was great and everyone seemed to have a great time.”

Spring Fest has attracted quite a large crowd in past years, sometimes up to 500 people. This year, Spring Fest attracted many outsiders who came to enjoy The Underachievers music.

“We weren’t surprised about the amount of external people,” Brachlow said. “We actually love when people outside of Quinnipiac come. It’s great that we have presence not only in Quinnipiac but outside of the school as well. We had people come from Long Island, Massachusetts and New Jersey all because of  The Underachievers’ committed fanbase.”