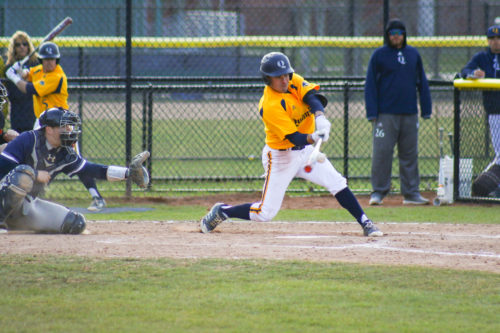 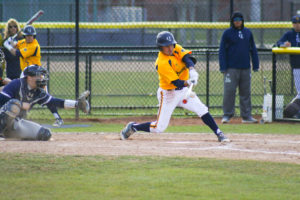 [/media-credit]The Quinnipiac baseball team (14-15 overall, 6-0 MAAC) enjoyed back-to-back walk off victories on Sunday afternoon, as it defeated the Monmouth Hawks (8-18 overall, 3-6 MAAC) by an identical score of 4-3 in the doubleheader.

With the wins, the Bobcats completed the three-game weekend sweep of the Hawks and maintained their undefeated record in MAAC play.

“When you fight until the end and you have one run games, and then you have two walk offs, those are the ones that build character,” Quinnipiac head coach John Delaney said. “They also build the fight in your team for late in the season. So give credit to the guys, they never gave up.”

In game one, it was junior outfielder Liam Scafariello who helmed the offense for Quinnipiac. After falling behind 2-0, Scafariello hit a three-run home run in the fourth inning to give Quinnipiac the 3-2 lead, his team-leading sixth on the season.

In the final inning, Monmouth jumped on graduate student pitcher Brandon Shileikis and got two singles to put the tying runner in scoring position. Senior pitcher Mike Davis entered the game, but immediately hit a batter to load the bases. Monmouth was then able to tie the game when senior infielder Shaine Hughes grounded into a fielder’s choice, but scored sophomore infielder Dan Abate on the play.

With the game tied in bottom of the seventh, junior outfielder Andre Marrero singled and represented the winning run. After sophomore infielder Dylan Lutz walked and junior outfielder Brian Moskey flew out, Scafariello ripped a hit into right field and Marrero came around and crossed the plate, giving Quinnipiac the 4-3 victory.

“It was amazing,” Scafariello said. “Without [Lutz] and Moskey, I don’t think I would have had a chance to win the game.” 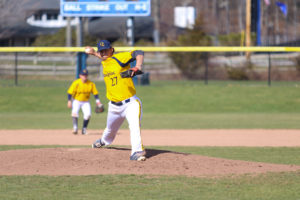 [/media-credit]Game two was a pitcher’s duel between Quinnipiac junior Tyler Poulin and Monmouth freshman Dan Klepchick. Poulin went 6.1 innings, giving up only three runs, with none of them being earned, while Klepchick went seven innings, surrendering one earned run on five hits.

“We didn’t help Poulin much,” Delaney said. “The kid put up zero earned runs, we made some mistakes behind him. Our defense needs to pick it up and be a bit better.”

After giving up the lead in the seventh, the Bobcats were able to tie the game at three in the eighth, when Moskey lined a double that scored Marrero. The game remained tied at that score until the 11th inning when senior infielder Ben Gibson smacked in the winning run. A leadoff single by Moskey and an intentional walk to Scafariello gave Gibson the opportunity to get the victory for his team, and he made no mistake, lacing a line drive into left field.

“I probably went 0-for-4 the whole day,” Gibson said. “But one thing our coach says is your next at-bat is always your most important at-bat. My approach was that I was going to be aggressive from the start. [I] saw a curveball, reached out, and just hit it hard.”

With the two wins, Quinnipiac maintained the top spot in the MAAC, holding a 6-0 record. While the season may already be halfway over, MAAC play has only just begun.

“We have to take it one game at a time,” Delaney said. “So I mean, as much as winning two weekends, being 6-0, is a huge accomplishment, it also hasn’t done anything for us. We haven’t won anything, it’s just a record in my eyes. We still have a lot to prove. There’s still a lot of teams out there who don’t believe who we really are.”

Quinnipiac’s next matchup will be against the University of Hartford (9-18 overall, 5-4 America East) on Tuesday, April 10 at 3 p.m. in West Hartford, Connecticut.