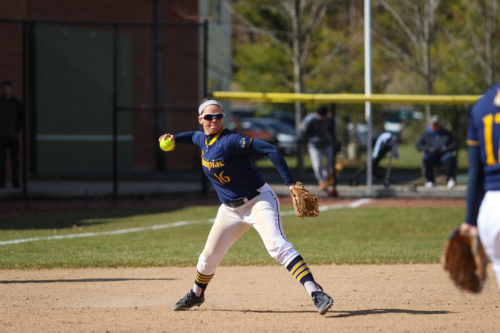 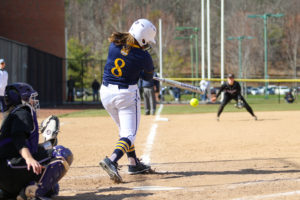 [/media-credit]The Quinnipiac softball team defeated Niagara in both games of a doubleheader on Sunday in Hamden, 5-1 and 9-0.

The Bobcats (16-17, 5-1 MAAC) and their offense scored a total of 14 runs and head coach Jill Karwoski just wanted her team to carry on the same message as Saturday.

“Confidence, we talked a little bit about that Saturday as our number one goal,” Karwoski said. “They knew a lot about the pitchers from the past two days and they felt good stepping into the box.”

Finley was happy with her teammates performance and just wanted to have consistency in both games at the plate.

“I felt a little bit more anxious in the first game,” Finley said. “In the second game I went up there more relaxed with a clean slate trying to move the runners over.”

It wasn’t just the offense for the Bobcats, as their pitching and defense added to the play the Bobcats had throughout the day.

Junior pitcher Kendall Brundrett took the hill in the second game, going five innings and only allowing one hit and no runs. 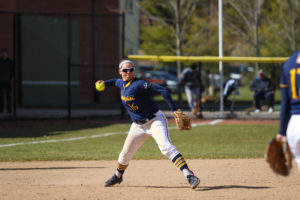 [/media-credit]“We hit really well the second game and all weekend long our defense has been awesome,” Brundrett said. “I knew I had to go out their and do my thing and let the defense do its thing, and the bats hit really well behind me so it was an all out team effort.”

Coming off  her last start against Canisius where she pitched five innings and allowed two runs while striking out three, senior Casey Herzog took the mound in the first game going seven innings, allowing one earned run and striking out six.

Herzog was impressed by her team’s overall performance and knew the her team just had to carry the same momentum from Saturday.

“Sunday was trying to carry over from what we did Saturday and stay consistent throughout the whole weekend because we knew this was a big weekend for us,” Herzog said. “We’re going to continue to work on our game plan and hopefully it will carry on to next week.”

Quinnipiac’s next opponent will be rival Yale at home on Wednesday. Coming into the game, Yale has lost five games in a row,and 7-22 overall.

Despite the numbers, Karwoski still expects Yale to be a formidable opponent and wants her team to continue the offensive outburst.

“It’s to build, we can’t be complacent either win or lose, so we’re going to use it to build going into next week.”