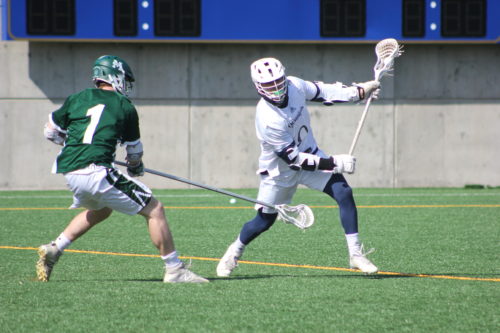 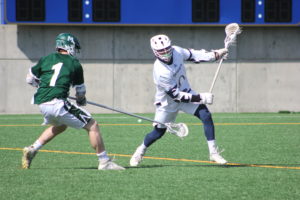 A seven-goal opening quarter gave the Bobcats a 7-2 lead just 15 minutes in. Quinnipiac head coach Eric Fekete credited the team’s ability to score through several players rather than just a couple for the team’s hot start.

“I think a lot of it is we’re feeling good on a certain day, where the matchup works on a certain day,” Fekete said. “But again it’s nice moving in that you’re more multi-faced. I think it makes it a little more challenging to prepare for us because you’re not sure where it’s coming from.”

Quinnipiac freshman attacker Jake Tomsik opened up the scoring with a goal in the game’s first minute. However, Manhattan’s Luke Hanson tied the game backup less than two minutes later.

Two and half minutes after Manhattan tied it up, senior midfielder Brian Feldman netted his 18th goal of the season with an assist from junior attacker Mike Fletcher from behind the net. Feldman’s goal sparked a four-goal streak for the Bobcats over a five minute span in the first quarter.

Fletcher scored the team’s next two goals, unassisted, to put Quinnipiac up 4-1 midway through the first quarter. Fletcher played a role in the next goal as he assisted senior midfielder Ryan Corcoran to put the Bobcats up 5-1.

After a goal from Manhattan’s Andrew Gresham, Fletcher recorded a hat trick by scoring his third goal, and fourth point, in less than five minutes.

“I’m just loose,” Fletcher said on his six-point game. “Honestly, any day I’m out there with these guys, like it’s just kinda fun and you go out there and you don’t really think about it. It’s just another day.”

Senior defender Riley Palmer scored the final goal of the first quarter with an assist from Tomsik. The goal was just Palmer’s second of the season.

Both teams scored twice in the second quarter as junior attacker Foster Cuomo scored both Quinnipiac goals in the quarter. 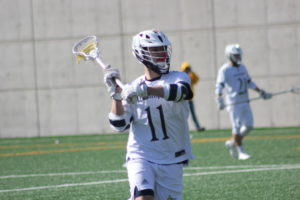 [/media-credit]Cuomo’s second goal was the last goal of the day for Bobcats as they did not score at all in the second half.

“Sometimes we don’t stay hungry for as long as we need to,” Fekete said. “…I love my team, don’t get me wrong, but sometimes we lack that killer instinct to keep it pumping. I guess it was a late start today, we got a little behind, but there’s no excuses. We’ve got to have a more consistent effort.”

But that did not matter as sophomore goalie Joe Zukauskas made eight saves in the second half and only allowed the Jaspers to score two goals, both of which came in the fourth quarter.
Fekete had praise for his goalie, as well as the defense, in the team’s victory.

“[Zukauskas] has been steady,” Fekete said,. “…we’re pretty deep at [goalie]. I think having the guys around him, Adam Bellamy, Riley Palmer, Mike Ruane, Bryce Nalls and Ryan Trzcinski a little bit, that group has really locked itself down. I thought they had a really good effort.”

With the win, Quinnipiac will go into its home-finale against Canisius on Saturday undefeated in MAAC-play.