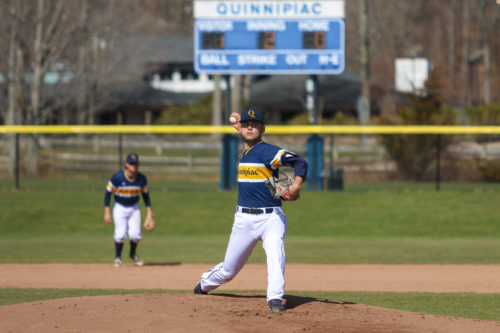 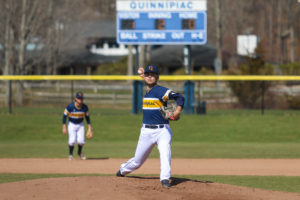 Head coach John Delaney was pleased that his team was able to get the win, but wants his team to take each game one at a time.

“It was our first game at home and that’s always the toughest to get,” Delaney said. “4-0 is great, but it means nothing because the team knows that as soon as they step on the field the next day, it’s about that game and trying to get that win.”

The Bobcats (12-15, 4-0 MAAC) were held of the scoreboard the first four innings, until they were able to score six unanswered runs in the fifth inning.

Scafariello was glad to get the win, and that he was able to come up with a home run in a big spot.

“(On the home run) it was a hanging curveball and I was just trying to get a good piece of it,” Scafariello said. “(Our performance) was unbelievable, we were down for four innings and were able to open up the floodgates and that just shows how tough we are and how good of a squad we are.”

The Bobcats defense also played a big part in the victory as senior right-handed pitcher Taylor Luciani was able to pick up his fourth victory of the season and allow only one earned run in six innings pitched.

Luciani thought he could of pitched better, but was thankful for his defense to pick him up in certain spots. 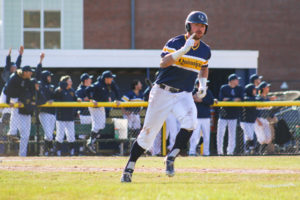 [/media-credit]“First couple of innings were a little rough, I missed a couple of spots, but after I talked to coach Egan in the dugout, we made a couple switches to my pitches, got ahead in the count and things worked out,” Luciani said. “It’s always nice as a pitcher to have a lead, but when you’re down is when you always give your best effort.”

Luciani’s performance also opened the eyes of his coach, who knew that Luciani could perform in high pressure spots.

“Luciani pitched well, we didn’t make enough plays behind him which hurt the score in his favor,” Delaney said. “He competed for us, he got big outs in big situations and that’s what you need from seniors on your team.”

Quinnipiac will play Monmouth again on Sunday, but this time they will play two games and Delaney expects those games to look much different than Saturday’s game.

“Monmouth is an aggressive team, they have a lot of hitters and we were lucky enough to not let them string a productive inning,” Delaney said. “They’re a very good defensive team, I’m not expecting them to compete at that same level Sunday, so we have to put more pressure on them.”