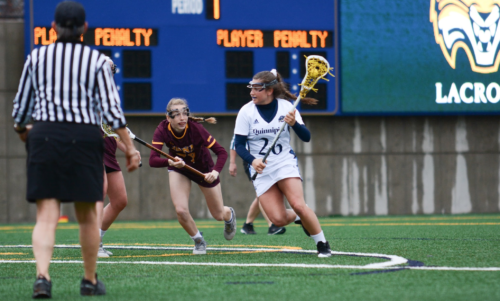 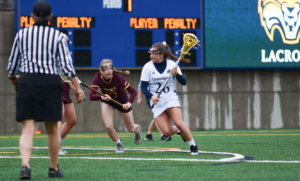 [/media-credit]Despite the sun eventually making its presence felt on a rainy Wednesday afternoon in Hamden, the Quinnipiac women’s lacrosse team lost to Iona College by a final score of 9-7.

“It was a game of momentum for sure,” Quinnipiac head coach Tanya Kotowicz said. “Obviously we were trying to climb ourselves out of a first half deficit, it was a game of catch up and we just didn’t have enough time.”

In this Metro Atlantic Athletic Conference (MAAC) clash, the Bobcats (5-6, 1-2 MAAC) trailed for the entirety of the game. They were shut out in the first half for the first time all season as the Gaels (6-6, 1-2 MAAC) were able to amass five of their eventual nine goals.

Five different Gaels found the back of the net. Senior attack Pamela Giordano recorded a hat trick on the way to reaching the 30-goal mark this season, as graduate student attack Katelyn Noschese also notched a hat-trick to claim her 20th.

Despite all this scoring ability by the Gaels, the Bobcats managed to hold them to just nine goals on the day. Credit for this falls to the Bobcats’ defense.

“They’re just steady,” Kotowicz said. “They know the game-plan, they follow the game plan and they always have each other’s backs. The fundamentals are our focus and they continue to bring that day in and day out.”

“I don’t think they were doing anything,” Drouin said. “I think that we just couldn’t capitalize on our shot opportuinties and we were just messing it up for ourselves. It wasn’t anything different from the first half, we pulled it together in the second half.”

Saying that the Bobcats defeated themselves is something that Kotowicz agrees with.

“Honestly, I think it was all on us,” Kotowicz said. “Calls weren’t going our way, which is never good, but that’s an uncontrollable. We were getting shots off, we just weren’t finishing and that kind of cost us.”

Kotowicz was noticeably displeased on the sideline following several calls throughout the game. In the end, both teams had two two-minute penalties called against them and the Bobcats finished with eight free position shots to Iona’s four.

“Unfortunately it’s an uncontrollable,” Kotowicz said. “I think our game is growing and we need better officials and to hold them accountable is important. The balance of letting it loose and making sure that you keep it under wraps for your team is important.”

An interesting sight this afternoon was the Bobcats’ leading scorer, sophomore attack Ashley Bobinski, on the sideline down the stretch of the game. Bobinski opened scoring for the Bobcats with her 22nd goal of the campaign.

“The players that were in were making it work,” Kotowicz said. “We trust them just as much as we trust Ashley, so we were making sure that we got a ‘W’ and unfortunately we fell a little bit short.”

Up next the Bobcats have another MAAC-clash against the Marist Red Foxes on Saturday, April 7 at the Quinnipiac Lacrosse stadium.