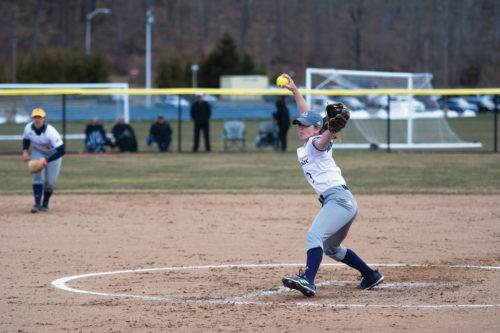 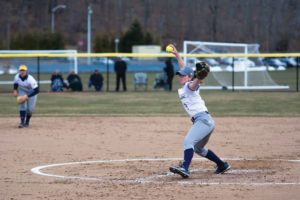 [/media-credit]In a one-run game with the bases loaded, senior pitcher Casey Herzog stared down UMass Lowell’s Casey Harding, only needing one more strike to secure the victory for the Quinnipiac softball team.

Herzog’s answer? She blew a fastball right by Harding to notch her team-leading ninth win of the season, her team’s tenth win and also her 400th career strikeout as a Bobcat.

“Right then, it was just like another strikeout,” Herzog said. “I honestly had no idea that I was close to that. Even now, it’s just another day I guess. But I think it’s something that will be cool to look back to in a few years and say, ‘Oh, I got 400.’”

Don’t let Herzog’s humbleness fool you. The 400 Ks are quite the feat. In fact, she became just the second Bobcat in history to record 400 strikeouts in a career, joining Heather Schwartzburg (‘12) as the only ones to share this honor. While Herzog, or even the coaches, may not have realized, it is an achievement that will cement Herzog’s name in Quinnipiac softball history.

“Well to be honest with you, I didn’t even realize she was up for the record,” Quinnipiac head coach Jill Karwoski said. “I found out after the game. It’s definitely a proud moment when any coach finds out that one of your players hit a milestone. Casey is certainly one that deserves the recognition because she has put in the time and she’s seeing the results on the field.”

However, coming to Quinnipiac, her role changed. After being the starting ace in high school, she had to revert to a reliever spot in her freshman year, where she recorded three wins, 60 strikeouts and a team-leading four saves.

“As a freshman, I came in when [the team] needed me,” Herzog said. “I was more of a relief-type pitcher.”

That position changed in her sophomore campaign. Herzog became one of the starters for the team, pitching to a 14-14 record with 153 strikeouts and a 2.92 earned-run average (ERA). She started on the mound in her junior year as well, going 10-15 with 106 strikeouts and a 3.44 ERA.

“As I’ve grown up, I’ve become more of a starter and full-game type of pitcher,” Herzog said. “I think that is something that is cool for me to look back on, to know the growth process through it all.”

Herzog’s growth has resulted in her becoming Karwoski’s go-to pitcher in her final year. Her senior statistics have stood out compared to her stats in the past, as she currently holds a 10-7 record with 94 strikeouts. In addition, her 1.30 ERA is first in the MAAC.

“I think the biggest improvement out of Casey is just that consistency,” Karwoski said. “She kept growing from her first year on the mound. Now she’s just a pure horse. So I think that consistency alone is something that needs to be commended.”

The beauty of Herzog is not only her dominance on the mound, but her ability to swing the bat as well. While most pitchers settle just for the rubber once they are at the college level, Herzog has shown that she is a weapon offensively at the plate as well, and that has given Karwoski the opportunity to add her into the batting lineup.

“I think that’s fun,” Karwoski said when asked about Herzog’s ability to hit. “Some coaches don’t like their pitchers to hit because they’re afraid of getting injured. If a pitcher can hit, I say give her a bat and let’s go, help herself out. This year, Casey has been putting up a couple doubles and is helping herself out where she can offensively.”

Herzog has certainly been able to give herself some support. She holds a .263 batting average, with 10 hits and four RBI’s as well. But the dynamic of swinging the bat and then hurling from the mound offers two different sides of the game to Herzog. 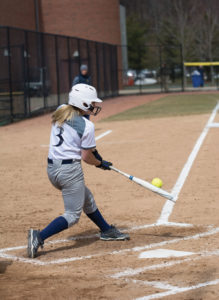 [/media-credit]“It’s very different because when I’m on the mound, I’m very serious,” Herzog said. “Whereas when I’m up to bat, it’s a way different game plan for me. It’s more of having fun and just giving what I can give to the team and if I can help out, that’s great. I try to help out both ways, but it’s a different mindset on the mound.”

With the pitching staff struggling a bit right now, Herzog is more important than ever. The other two starters, junior Kendall Brundrett and sophomore Abbey Long, have had a rocky start to the season. Brundrett holds a 1-3 record with a 6.58 ERA and Long is currently winless with a 0-7 record and a 10.72 ERA.

“[Herzog’s] really crucial right now,” Karwoski said. “We’re trying to get a little consistency out of the bullpen, so you know, she’s been the heart and soul out of our pitching staff. She’s a player that’s not afraid to carry the team on her back and she’s shown that early on in the season, so we expect great things going into conference.”

With MAAC play just finally starting up, Herzog & Co. have their eyes set on another MAAC tournament berth. After losing in the semifinals in 2016, the Bobcats failed to qualify for the tournament last year.

“(Our) expectation is definitely to make the MAAC tournament and put our fight in for a tournament win,” Herzog said. “Definitely just coming together as a team a bit more, trying to get some more wins on the day by taking some doubleheaders. That way we can have a little bit more confidence going into MAAC play.”

Herzog must continue notching those Ks for the Bobcats if they want to reach the tourney again. With 94 strikeouts so far on the season, Herzog is on pace to surpass her strikeout total from last year of 106 and compete to possibly break her single-season record of 153, as the team still has 24 of their 52 games remaining. But for now, Karwoski wants her focus to be on consistency and sticking to her game plan.

“Going into conference, I don’t expect her to change a thing,” Karwoski said. “Go out there, pitch her game and we’ll put up a couple runs so she can get that ‘W.’”