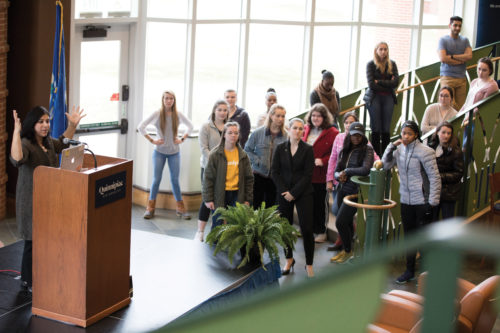 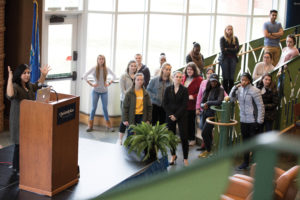 [/media-credit]Women’s equality remains to be a civil right fought for across the nation, and the university contributes in trying to open more eyes to the fight at hand.

Students and faculty volunteered at a teach-in to celebrate International Women’s Day on March 29 to acknowledge the struggles women face in the world and calling forth action to prevent them from happening in the future.

Each individual spoke for roughly 10 to 15 minutes about a particular topic, leaving room for discussion with the audience afterwards. With 15 presenters, the program spanned nearly six hours.

The theme for this year’s teach-in was titled “The Silence Breakers,” which is a term used for people who have come forward with allegations of sexual misconduct.

The lectures brought up topics ranging from gender pay differences, global feminism and the composition of gender.

Associate Professor of English Timothy Dansdill spoke about the composition of gender by referring to the negative implications certain religions present about being a woman through its biblical characters. The most well-known example is the Christian old testament’s depiction of Eve who was the first human to ever defy God.

“What has been the legacy of the first woman created not by a God-Goddess coupling, but by a single gendered masculine, and presumably biologically, creator god?” Dansdill said in the lecture, “How would this influence your own sense of what it means to be gendered female or gendered male?”

The lectures not only brought up the issues that affected the country, but also within the university. These problems were visible in Dansdill’s lecture and in the presentation of junior philosophy major Filomena Stabile who spoke about the #MeToo Movement with senior education policy major Nisha Gandhi.

Stabile’s presentation included the origin of the #MeToo movement and how the movement connects with the academic community.

“[Gandhi and I] kind of talked about how Timara Burke took off with that in 2006, and then it was brought back up last year on Twitter by celebrities,” Stabile said. “Then we brought it back to Quinnipiac. We talked about their statistics and the reported sexual assault cases here and things that we can do to make Quinnipiac’s campus safer.”

Sophomore political science major Gabby Parker was spoke about party culture at the university alongside junior economics major Megan Kelleher. The lecture mentioned how peer pressure in party culture can add a spotlight on women to act a certain way in order to receive greater attention.

Women are often pressured to act promiscuously by showing more skin or they are pressured to aim for specific types of people to flirt with as a way to increase their social status, according to Parker. Parker asked the audience about where they would draw the line between female accountability and victim shaming.

“We wanted to bring that to light and address the situation with some of our male audience members to see what they have to say and what they can do and potential ideas of how they can prevent this fine line of accountability,” Parker said.

Instructional Design Librarian Cecilia Dalzell was a speaker as well, and said events like the teach-in take learning out of the classroom and into the academic community.

Dalzell spoke about the Magdalene laundries, institutions in Ireland that housed “fallen women,” which is a term used to imply female sexual promiscuity or working in prostitution. Dalzell commented on how systems that condone or encourage unquestioning obedience to authority lead to originally idealistic people doing wrong, abuse and oppression.

“I hope that those who heard my talk won’t just pass it off as something that happened in another country in the past but observe, question and speak out against these tendencies when they see them in our own society today,” Dalzell said in a statement.