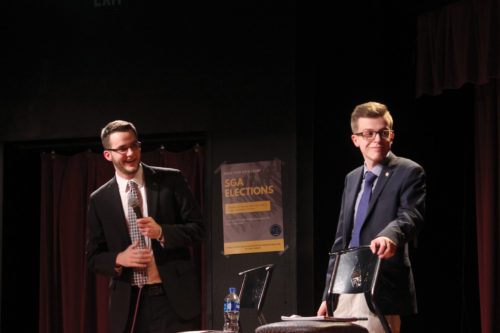 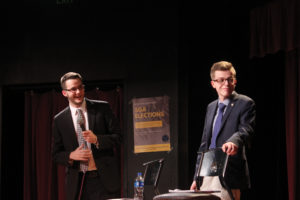 [/media-credit]The Student Government Association (SGA) held its executive board debates on Monday, April 2 in the Buckman Theater. Each candidate had the opportunity for a two minute opening statement followed by two to three questions, with a chance for rebuttal.

“Students expect our members to produce change,” Schmedel said “But this change can only come about when organizations are equipped with strong leaders who can ensure success.”

The following are questions and answers from Monday night’s debate.

The Student Government Association is an initiative based organization. Both of you served SGA for three years in two very different ways. Ryan, although you’ve been successful in the past year in advocating for student fees, during your time as a class representative and class president you lead very few initiatives. If elected SGA President in the coming year how do you plan to advocate for a variety of student needs.

“So to address the first aspect which is that I didn’t necessarily do a lot, I think it was finding where I fit in in SGA. I think that this year and the success I’ve had this year has allowed me to thrive with that. In addition, the three years in SGA you learn a lot about what’s going on, so I think as a freshman I really had trouble finding my footing and as a result I had a little trouble being able to advocate. I now have three years and I started as a class representative, a class president and a leader on the executive board as the Vice President for Finance. I’ve seen our organization from pretty drastically different positions and I think that’s why I have a lot of insight. I support initiatives and support any student who comes to the student government association and says ‘this is a problem on campus and it needs to be addressed.’ I think that my diverse background of position will allow me to look at a problem brought to us and say ‘Here are the proper steps we can take to fix that problem.’”

Joe you’re often the first to take on tasks within the organization, but at times you don’t follow through. How will you manage your time effectively to lead the organization to success?

“Great question. Time management is not easy. Like (Schmedel) said there’s so many things to do in the world and so little time to do it and I’m the type of person who likes to do everything. I want to jump on things and get them done right away. However, I’ve realized a couple of things in the last few months. A big one is it’s not the best idea to become that person that takes everything on. I always want to take on all these new initiatives that I think of right away, but then I think there’s other people around me who are passionate about those same things and I can empower them to do it. An example this year, I was working on an initiative to improve sustainability on campus and when Freshman Class Representative Lille (Gaeta) wanted to bring hydration stations into the dorms on campus, I gave her what I knew about that and she carried out the initiative on her own and was able to complete that. I think that it’s important I trust other people and that will allow me to manage my time and I really learned this year that that’s the best way to do things.”

The Vice President oversees the a multitude of areas within their role. In your opinion what is the most important job of the vice president and what makes you most equipped to satisfy the job?

“I think what makes me most equipped to satisfy this job is that I have a lot of experience under SGA and I’ve worked on many initiatives myself. To that, what comes to mind in particular are there’s a new pathway and lighting by the softball field and tennis courts. So I think that because of my prior knowledge of working on initiatives and having the experience of being successful in them and doing so I’ll be able to better drive the rest of the SGA representatives and those who are working on initiatives to truly make a great impact on our community. “

The Vice President oversees the a multitude of areas within their role. In your opinion what is the most important job of the vice president and what makes you most equipped to satisfy the job?

“I agree that as vice president for the student body it is very important to actually get work done and complete initiatives, however I think the most important role of the student body vice president is to keep the organization running smoothly. Not a lot of people outside of Student Government realize that internally there is a lot that the Student Government Vice President really has to do. I think that, yes, one person can go out can get a lot of work done, but if the organization is running smooth and operating efficiently we have 40 members who are capable of getting their own work done.”

Both your and Helen’s campaigns are heavily focused on securing funding for conferences and competitions. The university will soon be deciding our budget for the upcoming year. Assuming the budget increases what other plans do you have?

“So, I’ve had the privilege of seeing Ryan (Hicks) really work throughout his term here at Quinnipiac as Vice President for Finance and he has tirelessly work to find out A). where (sic) the money is going, which doesn’t seem we’re going to get a promising answer from the university based on what he’s telling me. But B). he’s (sic) also secured a $50,000 check given from the Provost of the university Dr. Mark Thompson for all conferences and competitions that were essentially asked for during a huge budget weekend as soon as he was first elected. 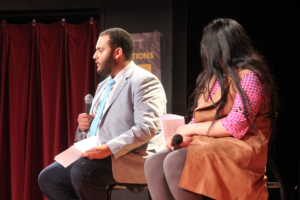 [/media-credit]I look to continue that relationship with Dr. Thompson or any other people of note at Quinnipiac to essentially really push for conferences and competitions as well as just additional funding. I don’t have a set plan as of now but when I have my mind set to something just know that I will get it done.”

With the campaign so heavily focused on conferences and competitions what other plans do you have if you were to become Vice President for Finance?

“I know John mentioned a lot of, not only SGA, but we need to find new resources not only on campus but also we should ask us the same question: ‘What’s next?’ We deserve an answer but we also need a backup plan to make sure the organization’s right now can best utilize the money they have. That leads to my campaign idea and my two plans. First find new resources for funding on campus. That involves different schools, different campus departments. They all have a budget in their hands and I know in the past when we, SGA, were doing finance meetings sometimes we will suggest renovations to go to those schools for accounts. I think it’s a great idea, but we’re missing some points there, we should be there with them as well.”

When you came into your role for the Vice President for Student Experience, you planned to help turn SGA into leaders with a wide knowledge of social issues. Do you feel like you’ve made progress on this and can you give us concrete examples of the change you’ve seen in our members?

“I feel to some degree ‘yes.’ It’s really really hard to try to force people to go to events. That’s why next year I’m trying to co-host events with multicultural student councils and force all SGA members to go them so the events will be mandator. This past semester, to be honest, I can’t really give too many concrete examples that people have made leaps and bounds in their growth, but next year that is one of my goals and co-hosting events with members of the multicultural student council will really help that.”

During your time this year as Vice President for Public Relations you struggled at times with your relationship with student media. How is it now and what are you doing to maintain better relations for the upcoming year?

“We’ve actually established a really good relationship with student media. We’ve gotten them involved in the elections, PR events, State of the QUnion, and they’re live streaming now which is awesome. They have the equipment that we don’t. So creating that strong relationship helps both of our organizations. It gets them on the map, it gives them the experience and it gets our events more publicity which I think is extremely important. Establishing a good relationship has been a win-win for both of our organizations.”