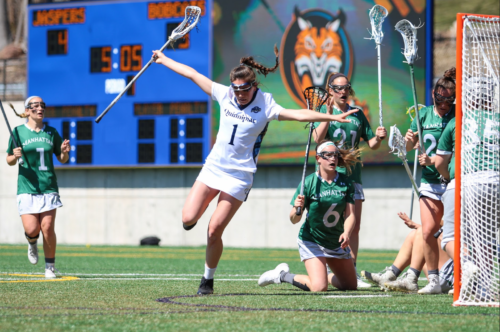 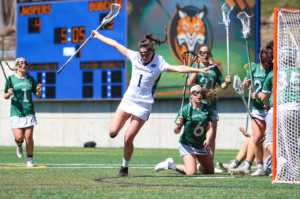 “It was definitely a team win,” Quinnipiac head coach Tanya Kotowicz said. “Obviously Manhattan is a physical and a tactical team and we knew we were going to have to fight hard together to win it. I think overall (it was) a team win, which is really nice to have.”

Quinnipiac junior attack Allison Kuhn finished the day with four goals and an assist, while sophomore midfielder Brianna Fitzgerald doubled her point total on the year, finishing the game with three goals and four points.

Fitzgerald had a bit of a slow start to the year, but has been making her presence felt the last three games. Over the course of her last three, including Saturday’s win, she has tallied six goals and one assist. This is an improvement to the start of her year where she tallied a lone goal through seven games.

The Bobcats also managed to shut down the Jaspers’ leading scorer, senior attack and captain Sarah Lang. Coming in, Lang had 25 goals and 30 points and left with that same total.

“The defense plays as a unit as always and just shut her down,” Fitzgerald said. “We practiced all week…we always look for the top people on the other team, but we just focus on working together and helping each other out and stopping them.”

A big factor on the defensive end for the Bobcats is senior defenseman and captain Kiera Kelly. Kelly leads the team in ground balls, now with 47, which is more than double anyone else on the team’s total.

“[Kelly’s] our glue,” Kotowicz said. “She can manage the defense without us being on the sideline. She makes sure that plays are made, but she steals the ball from another team and I think that’s what we utilize her most for.”

To cap off the defense’s strong showing today, senior goaltender Kyle Larkin stood strong, stopping 10 of 16 shots that she faced en route to her fourth win of the season.

“She had her body behind every ball and she was locked in from the first whistle,” Kotowicz said. “[She] did the work I know she’s capable of doing.” 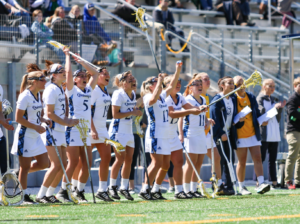 [/media-credit]There was a buzz in the air in Hamden throughout the game. That came as a result of the Bobcats’ sideline. The team had an assortment of cheers that they cried throughout the game, from the draw to the celebration of a goal. The energy carried from the sideline to the field, according to Fitzgerald.

“(It) feels amazing, our sideline really picked it up,” Fitzgerald said. “We knew how big their sideline was going to be and they just knew they had to bring the energy and we even felt it on the field. Them going ‘Kuuuuuhn’ on the draw just made everyone so happy and so hyped to play.”

The Bobcats look ahead to their next MAAC matchup against Iona in Hamden on Wednesday, April 4 at 3 p.m. The energy that the Bobcats brought Saturday should definitely stick around, according to Kotowicz.

“Energy wins, so I think it helps connect the field to the sideline,” Kotowicz said. “That’s so important because we all wear the same jersey, we have to make sure they feel that way.”